Capetonian Riaan Manser is an adventurer. He has cycled around Africa and kayaked around Madagascar. And while it's been nothing short of amazing, he's learned some valuable lessons along the way. Being alone for such long stretches of time, often broke and always tired, Riaan has learned many things the hard way – like the importance of the right nutrition, rest and how powerful a strong mind can be.

His latest book, Around Madagascar On My Kayak, is a testament to the strength and power of the mind. Read the review here.

He survived long, silent hours on his own, out at sea with nothing but his thoughts for company and the occasional curious sea creature – surely a test to even the strongest mind.

Watch the interview Carte Blanche did with him here:


“The loneliness is something I really had to prepare myself for after the Africa trip. I made it through each day by talking to myself – which isn’t crazy,” he said with a smile. “When you’re in a situation where you’re completely isolated from other human beings you have to speak to yourself and I would congratulate myself daily on just getting out alive.”

This daily struggle for survival in a very harsh environment has not left Riaan unscathed, and he has the scars, missing tooth and photo’s to prove it. The rash Riaan got from a spider bite which took almost a month to go away.

Riaan’s first book, Around Africa on my bicycle saw him tackle the formidable and unpredictable African continent over a gruelling two year journey. Yet this didn’t stop him from embarking on the Madagascar trip just months later – another solo adventure packed with its own unique and dangerous quandaries.

Cracked heels and dry skin only added to his physical woes on the trip. And while it’s admirable to have such a brave and fearless attitude to life, one wonders what life lessons Riaan has learned along the way to stand him in good stead for his future adventures.

According to Riaan one of the biggest lessons he has learned is the value of good nutrition.

“It was only after I got malnourished that I realised how important nutrition is, that it’s the base for everything and without it I suffered. I make sure now that I eat healthy meals whenever I can because being malnourished is not nice,” he said. 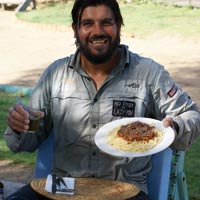 One example of how malnourished Riaan was on the Madagascar trip is how his teeth have been depleted of their calcium stores; to the point where he actually had to remove one of his own teeth with a pair of pliers during his trip.

Yet eating healthy isn’t so easy when you’re on an adventure of African proportions, so how did he manage to keep himself fed and energised during his trips? It’s all about vegetables and lean proteins.”

“Eating healthy and what your body needs is actually so simple, but you need to learn to understand it. I could really feel the effect not eating right had on my body, especially when I was paddling for 18 hours a day. Your body needs nutritious food.”

Long hours spent alone battling sea swells, scorching hot temperatures and just basically battling to stay alive can drain what little energy you have too, which is where Riaan learned the importance of rest. “I have found that if you can find the balance between getting the right nutrition and enough rest daily, anything is possible,” he said.

The balance between keeping cool and not getting too sunburned was a delicate one. He explained how his body craved a good night’s sleep after what would often be a good 15 hours of paddling on rough seas.

Yet he said that becoming accustomed to listening to his body when it needed food and when it needed rest which is something he will always pay attention to.
Tumba fly eggs which were laid under Riaan's big toe nail during the trip. To win one of three signed copies of Riaan’s book Around Madagascar on my kayak, tell us what kind of adventure you would like to go on and e-mail it here.

We live in a world where facts and fiction get blurred
In times of uncertainty you need journalism you can trust. For only R75 per month, you have access to a world of in-depth analyses, investigative journalism, top opinions and a range of features. Journalism strengthens democracy. Invest in the future today.
Subscribe to News24
Next on Health24
The world, your playground