The increased competitiveness of schoolboy rugby has resulted in the players becoming bigger and stronger. For example, the average body mass of players at Craven Week has increased by 10 kg (6.6%) since 1968.

It is clear that the heavier players have a competitive advantage, or from another perspective, one can argue that the smaller players are at a disadvantage when it comes to being selected for high-level teams.

Another factor which accounts for varying sizes amongst players of the same age is the different rates of development, particularly the onset of puberty.

The main points arising from this research were:

• The disparity in body size before, during and after puberty may increase the risk of injury.

Are smaller players losing out?

These findings result in two possible scenarios for smaller players. Firstly, the smaller, talented players will choose sports in which they can express their talent and not be limited by their lack of size, as would be the case in rugby.

This option would result in much talent being lost to rugby. Some players in this group may be late developers, who possess superior skills associated with success in rugby.

However, despite possessing skills, these players may be overlooked because of their lack of size at the junior level. If these players are not managed appropriately, their superior skills may not ever have an opportunity to manifest and develop fully.

The second scenario is that the smaller players may choose to play rugby but will always be at an increased risk of injury because they will be playing against boys who are bigger and stronger.

This raises questions about whether the game needs to be managed differently to cater for these smaller players, particularly during the pre-pubertal years where most of the variation in size exists.

There are two possible management strategies which can be considered: either the laws of the game are changed to minimise the impact of varying size during the junior years, or the matches are played with the teams defined by weight group rather than by age group.

The goal of having weight, rather than age, categories, at the junior level would be to narrow the size difference which exists in junior players, and provide more opportunities for smaller players to excel.

Ostensibly this would provide a better environment for skills development and reduce the risk of injury.

An argument for weight categories has been made before, with a suggestion that there should be an introduction of lightweight competition at the international level, including a lightweight rugby World Cup. This approach would allow countries with smaller people an opportunity to compete equally.

On the negative side, weight categories would detract from the “spirit of the game”, which promotes and encourages different sizes and skills for the various playing positions.


Considering the maturity of players

For the purpose of this discussion maturity can be considered based on physical, motor and cognitive functions.

A good player needs to be well developed for his age in all these categories – a deficiency in any category will result in impaired performances. If the player does not have an intuitive coach this will result in lower self-esteem, lower self-confidence and may lead to the player stopping playing rugby or moving to another sport which caters for his physical and psychological needs.

The next section will discuss research applicable to physical, motor and cognitive  development in the context of maturity of rugby players.

The increase in height and mass of South African schoolboys with increasing age (six to 14 years) is shown in Figure 1.

As expected, their body mass and height increased consistently through their developing years up to puberty. The variation in height and mass at each age group is clearly shown by the spread of values around each data point (expressed as standard deviations in Figure 1).

For example, a large 10-year-old may have a similar body mass to an average-sized 13-year-old, or a large ten-year old may be more than 20 kg heavy heavier than a smaller boy from the same age group. 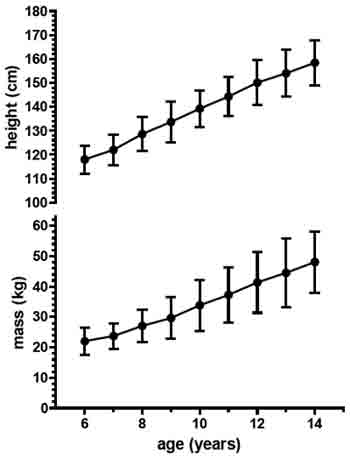 With rugby competition at school in South Africa being defined by age group, it is quite common to see boys with these large differences in mass and height competing against one another.

These differences are at their greatest during the pre-pubertal, pubertal and post-pubertal period, which spans about five years (14 to 19 years).

Do mature players have an advantage?

It is clear the players who mature earlier are at a distinct advantage, particularly in a sport such as rugby which is dependent on size. Indeed, it has also been shown in other sports, such as soccer, that elite adolescent players were mostly early maturers, and that late maturers were either relegated to lower teams or migrated to other sports.

A simple interpretation of this data is that it is more appropriate to define competition according to weight categories; however, this view needs to be considered in the presence of other evidence.

Links between injuries and size

Whilst a mismatch in size may be interpreted as unfair competition, this has also been implicated as a risk factor for injury.

As a consequence of the potential problems of having various body sizes participating against one another in the same age group, two prominent investigators of rugby injury in South Africa have previously suggested the introduction of weight categories to Rugby Union.

Ideally, the introduction of weight categories at schoolboy level would allow smaller players the opportunity to excel in the game. This would increase the number of players at schoolboy level, and would, in all likelihood, decrease the attrition which occurs in the present model in South African rugby.

This alteration may result in a greater pool of players at a senior level. Weight categories would remove the unfair advantage larger players have over smaller players because of their inherited anthropometric characteristics.

However, there are disadvantages of having weight categories for rugby. Firstly, making young, but heavier boys play with older boys may introduce a new set of problems related to social development and injuries.

Also it is unrealistic to think that categorising only by weight, without taking any other body composition factors into account, may overcome problems:

The best solution to the problem, is to adopt a long-term talent development model, similar to those practised by Australia and New Zealand. These models are dynamic and consider the maturity status and level of development of the young players, with the overall result of being more inclusive for all sizes rather than exclusive for smaller players.

This approach will require a major paradigm shift in South Africa, and may take some time to implement. A more pragmatic approach for a short-term solution can be developed by examining guidelines of maximum weights, specific for age groups and playing positions.

The guidelines can be drawn from normative data of different age groups and playing positions.

Besides the risk of injury, failure to address the problem of significant body size mismatches in youth rugby in South Africa may result in the maintenance of a player attrition rate that is much larger than that which exists in other major rugby-playing nations.

Whilst South Africa has a large pool of players to draw from, and therefore is less affected by the attrition of players, there is no guarantee that this situation will remain the same in the future.

If the pool of players decreases, players will need to become a more valued resource and will have to be managed more carefully. In this case, the implementation of a long-term player development model will be crucial.

However, it is hoped that is will not take a severe reduction in the rugby-playing population in South Africa to implement such a successful programme.

(This is an extract of the Age vs Weight Category article on SA Rugby, for the full article click here).

We live in a world where facts and fiction get blurred
In times of uncertainty you need journalism you can trust. For 14 free days, you can have access to a world of in-depth analyses, investigative journalism, top opinions and a range of features. Journalism strengthens democracy. Invest in the future today. Thereafter you will be billed R75 per month. You can cancel anytime and if you cancel within 14 days you won't be billed.
Subscribe to News24
Next on Health24
How to choose the best sport supplements