Let there be darkness 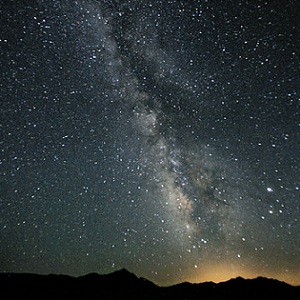 “Light pollution” seems like a non-issue concocted by the lunatic Green fringe. The International Dark-sky Association (IDA), for example, uses terms like “light trespass”, without a glimmer of humour, for when your neighbour’s security light shines into your bedroom. Milky Way, they remind us, is not just a chocolate bar. The IDA’s mission is to save the night sky, a treasure lost to the glare of city lights.

But there are reasons to dim the lights beyond the aesthetic: our glowing cities contribute significantly to carbon emissions, disturb wildlife and plant growth, and could have health consequences.

Most recently, a study has found that people with type 2 diabetes have low levels of the hormone melatonin. Our bodies produce melatonin in darkness while we’re asleep, and its production can be suppressed if we're exposed to excessive artificial light. The researchers can't tell yet if low melatonin actually contributes to the development of diabetes, but the finding is an important addition to the field of investigating light and its potential health effects.

Why we need the dark

Levels of the hormone are naturally lowest during the day, but increase in the evening. Photoreceptors in the eye register dimming light levels, and stimulate the pineal gland in the brain to increase melatonin production accordingly.

The concern is that too much light at night could inhibit melatonin production. It's well recognised that disturbed sleep (caused, for example, by shining a bright light on the sleeper’s face) interferes with the body’s rhythms, and causes sluggishness, poor concentration, depression and irritability.

But there's disturbing evidence that reduced melatonin might be a causative factor in serious health problems in the long term too. In addition to diabetes, these may include certain cancers (especially breast cancer), mood disorders, sleep disorders, obesity, heart disease and reproductive and developmental problems.

People who work unusual hours that expose them to many hours of artificial light, such as night nurses and airline staff, are at increased risk for certain cancers, prompting the World Health Organisation to add night-shift work to the “probably carcinogenic” list, which includes other prime suspects like UV rays and diesel fumes.

Melatonin is thought to help protect genetic material from the mutations that lead to cancer. Thus artificially extended days, and the melatonin suppression this may cause, could increase the risk for certain cancers.

Breast cancer has been the most intensively studied as regards light exposure. Reduced melatonin production is linked to increased production of oestrogen by the ovaries. This, in turn, is associated with an increased risk for breast cancer.

Studies on women who work the night shift in artificial light have shown that their incidence of breast cancer increases, and it increases even more with longer shifts and the number of years they spend working at night. Further, it appears that blind women are at significantly lower risk for breast cancer, which may be because they have consistently higher melatonin levels. A 2001 study by the Cancer Registry of Norway showed that totally blind women have a 36% lower risk of breast cancer compared to sighted women.

Evidence has been mounting that the night-shift predisposes workers to endometrial, prostate and colorectal cancer as well. Scientists have also speculated that artificial light could be one of the culprits responsible for the steady increase in the incidence of childhood leukemia – up by about 50% over the last fifty years in children under five. Over the last half-century, children, particularly in the developed world, have been exposed to increased amounts of artificial light from various sources – TVs and computers as well as general night lighting.

The incidence of “precocious” puberty – when signs of puberty appear earlier than normal – is increasing throughout the developed world, particularly among girls. One suspected factor is their average weight increase; another is reduced melatonin levels.

Melatonin normally acts to delay the onset of puberty. An Italian study found that watching too much television may upset children’s hormonal balance, reduce melatonin levels, and lead to early puberty. Children who took part in the study usually watched an average three hours’ TV a night. For one week, their parents denied them access to TV, computers and video games, and reduced their exposure to artificial light generally. The kids' melatonin levels shot up.

Too much screen time also encourages children to be sedentary, making them more likely to become overweight – which is thought to further suppress melatonin production. Apart from precocious puberty, decreased melatonin levels could disturb sleep patterns and cause hyperactivity.

Concern about what the artificial day was doing to the developing eye prompted a study into the effects of those comforting night-lights in children’s bedrooms. The results showed that children who used night-lights up to age two had a significantly greater chance of developing short-sightedness.

Previous studies on chicks' eyes, which are a good comparative model for human eyes, showed developmental abnormalities if the chicks were exposed to high levels of artificial night light.

More research is needed in order to understand the complex ways our bodies respond to light, and to what extent this poses a health risk.

Meanwhile, the following are sensible precautionary habits, which save electricity too:

We live in a world where facts and fiction get blurred
In times of uncertainty you need journalism you can trust. For only R75 per month, you have access to a world of in-depth analyses, investigative journalism, top opinions and a range of features. Journalism strengthens democracy. Invest in the future today.
Subscribe to News24
Related Links
Diabetes link to low sleep hormone levels
Next on Health24
More reasons why rush-hour traffic is bad for your health