Hundreds of dead abalone have washed up on Melkbos beach near Cape Town in recent weeks, prompting fears that the ocean in the area between Bloubergstrand and Melkbosstrand is toxic.

The Department of Agriculture and Forestry & Fisheries has allegedly alerted all abalone quota holders that the Melkbos area is a no-dive zone until further notice.

This is a particularly worrying as the upcoming Easter weekend would normally bring hordes of families, surfers and fishermen to the area. To date, no official notice has been publicly broadcast warning the public of the concerns. Marlin washes up on Melkbos beach

Melkbos resident Beatrix McLaughlin, who is an abalone quota holder for the Melkbos area, first became concerned about the quality of the water on March 25 when a marlin weighing roughly 240kg washed up on shore.  According to McLaughlin this fish is uncommon for the area. 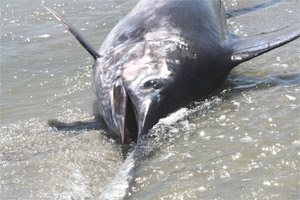 Marine Coastal Management (MCM) was called to collect the fish (see images below). 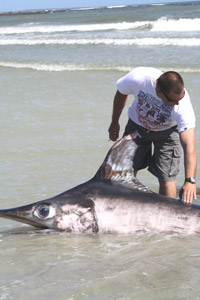 However, McLaughin says that despite repeated e-mails and phone calls to try and find out whether the fish was tested and what the results were, she has not heard anything back.

Then last week ,on April 11, McLaughlin says that two commercial abalone fishing boats “working in the Melkbos area Zone G, came across thousands of dead abalone and other sea organisms.  They had to abort [the dive] as it was not safe to collect”, as they suspected the deaths were due to toxins. They immediately phoned MCM from the water to inform them of the problem and were told to abort the dive and that the Melkbos area was a ‘no dive’ zone. This information had not been shared before.

To add to the mystery, McLaughlin says that at this point they came across a Koeberg Research Boat with divers who told her they had “not come across anything like this” before.  The fishermen handed over samples of the dead abalone, after which McLaughlin said the boat “headed back to Koeberg very quickly”. Concern continued to grow amongst commercial fishermen that the water in the Blouberg, Big Bay and Melkbos areas was perhaps toxic , and on the morning of the April 12, when McLaughlin  came across dead abalone and eel on the Melkbos beach, she decided to bag as many of the dead creatures  as possible and made an appointment at the MCM offices to get to the bottom of the problem. “While I was picking up the dead abalone to take them to MCM, there were dozens of other people also collecting them off the beach to take home and eat. I tried to tell them not to but they looked at me like I was crazy. But the kelp is dead too, and even bottom feeders like eels are washing up on shore so something is going on. When I got home my hands were burning from touching the abalone,” she says. Yet when she finally had her meeting with MCM management and presented them with the now-foul smelling dead abalone, she claims that she was merely congratulated for “looking after the coast and bringing this to their attention”.

“They said they didn’t realise the situation was so bad, despite my numerous e-mails and phone calls to them before that, and said they would make measures to alert the relevant municipalities.”

With only a few days to go until the Easter weekend, the beaches in this area are already teeming with surfers, children swimming in the sea, people fishing from land and people walking their dogs.

The real question is what is happening to the water, and if it’s killing sea-life, is it a threat to human health? Is the water toxic? Does the Koeberg Nuclear Power Station have anything to do with it? Is it a result of sewage being pumped into the sea?

We attempted to put these questions to MCM but were told they were unavailable.

“I would like to know why the public is not being made aware of what’s happening here; and if the water is toxic - which I do believe it is - the public should be made aware,” says McLaughlin.

Dead abalone due to low oxygen

Get the newsletter
Voting Booth
Have you entered our Health of the Nation survey?
Please select an option Oops! Something went wrong, please try again later.
Yes
28% - 9938 votes
No
72% - 25990 votes
Previous Results