5 ways to get your road rage under control 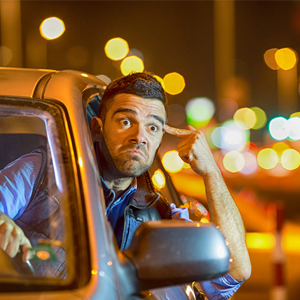 The stories about tragic road rage incidents are plentiful. Recent news out of the US is of a 24-year-old Air Force veteran Cody Harter who drove to his parents’ home to borrow a mower. On his way home, he hit traffic and got in an argument with another driver. The conflict intensified, and the other motorist allegedly stabbed Harter to death.

This sad story is just one of the latest examples of a road rage incident turned fatal. As defined by the National Highway Traffic Safety Administration, road rage is “the operation of a motor vehicle in a manner that endangers or is likely to endanger persons or property”, such as intentionally striking another vehicle or actually being violent towards another motorist.

Read more: 6 motor skills to make you a better driver

Road rage is a fairly widespread phenomenon: Nearly 80% of drivers have reported experiencing aggression or road rage at one point or another, and eight million drivers had taken it a step further by purposefully hitting other vehicles or confronting drivers, according to a poll conducted by AAA in 2016. But it can have devastating consequences.

“There’s a lot of evidence that some people feel pretty grounded in other social situations – friends, family, work – but somehow when they get in the car, there’s this Jekyll and Hyde transformation,” says Robert Nemerovski, PsyD, a therapist who specialises in anger and road rage.

“I think there’s something about the act of driving that allows some anger to come forward for people who wouldn’t normally see themselves as angry.”

Nemerovski, who was inspired to study road rage after he got in an altercation with a driver who threatened him with a baseball bat, says that in many ways, road rage is no different than other forms of anger. But there’s an important distinction: The relative anonymity of being behind the wheel empowers drivers to behave more aggressively, recklessly or boldly than they otherwise would.

Read  more: Howto save your body on a long drive this holiday

“I think there’s something about the act of driving that allows some anger to come forward for people who wouldn’t normally see themselves as angry,” he says.

“People that engage in road rage have anger that leaks over to other parts of their life,” Dr Steve Albrecht, a threat assessment expert, told Men’s Health. “If you don’t get treatment you’re going to keep replicating the behaviour.”

How to get your road rage under control

Fortunately, there are ways to actively curb your road rage.

1. Adjust the expectations for your commute.

If you frequently find yourself angry at unexpected traffic delays, the taxi that just cut you off, or at other motorists for slowing you down, perhaps you should wake up 15 minutes earlier to allow for extra drive time.

Nemerovski also suggests taking a survey of the car environment. What’s on the radio? Things like political talk radio or intense music could spike stress levels. Instead, Nemerovski recommends an audiobook, a stress ball, deep breathing or mindfulness practices to help tether you to a less emotional state. Just being conscious of your own stress can help prevent an escalation.

“Think about how you’re feeling when you sit down in the driver’s seat,” Nemerovski says. “You’re carrying a lot of that pent-up anger and tension and a lot of that isn’t to our awareness and you get into the car and your stress level is already high.”

2. Think about how you react.

While you can’t predict when someone will cut you off (especially with regards to taxis), you can train your reactions. Whether you’re a yeller, horn-slammer or tailgater, these physical manifestations of anger all stem from sensing a breach of territory. “People use the vehicle, either intentionally or mindlessly, to punish or communicate to another driver that they feel violated,” Nemerovski explains. “That’s the key message that anger gives us: We feel physically threatened, we feel like something’s been taken away from us.”

Instead of lashing out, try to slow the anger down. Identifying why you’re upset in the first place can help your internal reasoning and future actions, remain purposeful and not impulsive. (Think: “This person cut me off and that’s why I’m mad. Let me diffuse,” rather than “I’m annoyed so I’ll tailgate this guy to show him what’s up.”)

This will help lessen the likelihood of engaging with other drivers, which could escalate to accidents or fights off the road, which have major consequences. “I’m a fan of tinted windows,” Dr Albrecht says. “Don’t make eye contact if you don’t have to. Focus on your driving, don’t look over and make faces.”

People are, by nature, selfish drivers. We’re thinking about where we have to go and the fastest way to get there. But here’s a radical thought: If we changed perspectives to be more sympathetic of other drivers’ situations –  maybe they’re late for a flight, have a family emergency – we’d be a little more forgiving, and not as quick to yell a few profanities.

“The perspective-taking makes people more human, more a part of the community,” says Nemerovski. “When you denigrate other people, you’re making them much different than you and you’re making their life less valuable than yours.”

Of course, if the behaviour is dangerous, Dr Albrecht says to continue driving, to take the next exit or altering your route, and calling the authorities or the “How’s my driving” number if it’s a company vehicle.

4. Focus on your own driving.

Don’t be the guy who pinballs back and forth between lanes. Use your indicators, avoid tailgating and don’t text and drive. Basically, don’t feel entitled to do what you want just because you’re in a rush. If there’s one thing you can control, it’s your own driving, says Dr Albrecht, “Let other people be and do your thing.”

If you struggle with road rage, chances are you struggle with controlling your anger in other areas of life as well. If you’d like to find a healthcare provider or support group in your area, get Googling and some are sure to pop up.

We live in a world where facts and fiction get blurred
In times of uncertainty you need journalism you can trust. For only R75 per month, you have access to a world of in-depth analyses, investigative journalism, top opinions and a range of features. Journalism strengthens democracy. Invest in the future today.
Subscribe to News24
Next on Health24
5 ways you can stop yourself from getting sick this winter