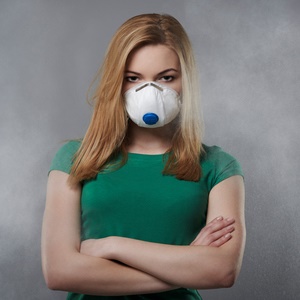 Do you know what might be lurking behind your wallpaper?
iStock

Wallpaper might give a new lease of life to a dull room, but did you know that there might be toxins lurking behind your wallpaper? In fact, wallpaper may contribute to "sick building syndrome", a new study suggests.

Sick building syndrome is the name given to the phenomenon when people who regularly occupy a building (like office workers) experience different symptoms whenever they spend time in the building.

Toxins from fungus growing on wallpaper can easily become airborne and pose an indoor health risk, the researchers said.

How can wallpaper be toxic?

In laboratory tests, "we demonstrated that mycotoxins could be transferred from a mouldy material to air, under conditions that may be encountered in buildings," said study corresponding author Dr Jean-Denis Bailly.

"Thus, mycotoxins can be inhaled and should be investigated as parameters of indoor air quality, especially in homes with visible fungal contamination," added Bailly, a professor of food hygiene at the National Veterinary School of Toulouse, France.

The symptoms of sick building syndrome are similar to flu and allergies, and may include headaches, burning or itching eyes, stuffy nose, sneezing, coughing, sore throat, tight chest, dry or itchy skin, dizziness, difficulty concentrating, nausea and fatigue. People prone to asthma or allergies may find that their usual symptoms worsen while they're in a certain building.

For the study, the researchers simulated airflow over a piece of wallpaper contaminated with three species of fungus often found indoors.

"Most of the airborne toxins are likely to be located on fungal spores, but we also demonstrated that part of the toxic load was found on very small particles – dust or tiny fragments of wallpaper, that could be easily inhaled," said Bailly.

Mycotoxins are better known for their occurrence in food. But "the presence of mycotoxins in indoors should be taken into consideration as an important parameter of air quality," he said.

The study was published in Applied and Environmental Microbiology, a journal of the American Society for Microbiology. Creating an increasingly energy-efficient home may aggravate the problem, Bailly and his colleagues said.

Such homes "are strongly isolated from the outside to save energy", but various water-using appliances such as coffee makers "could lead to favourable conditions for fungal growth", Bailly explained in a society news release.

Apart from wallpaper, sick building syndrome can also be caused by:

Workplace not as safe as it can be

We live in a world where facts and fiction get blurred
In times of uncertainty you need journalism you can trust. For only R75 per month, you have access to a world of in-depth analyses, investigative journalism, top opinions and a range of features. Journalism strengthens democracy. Invest in the future today.
Subscribe to News24
Related Links
Sick building syndrome
FAQ: Sick building syndrome
What is sick building syndrome?
Next on Health24
Work takes high toll on Americans