Can dogs read our minds?

Can dogs read our minds? How do they learn to beg for food or behave badly primarily when we're not looking?

According to Monique Udell and her team, from the University of Florida in the US, the way that dogs come to respond to the level of people’s attentiveness tells us something about the ways dogs think and learn about human behaviour. Their research, published in Learning & Behaviour, suggests it is down to a combination of specific cues, context and previous experience. 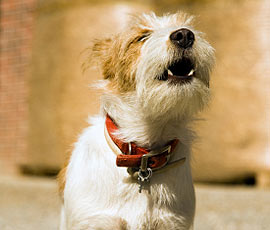 Recent work has identified a remarkable range of human-like social behaviours in the domestic dog, including their ability to respond to human body language, verbal commands, and to attentional states. The question is, how do they do it?

Do dogs infer humans' mental states by observing their appearance and behaviour under various circumstances and then respond accordingly? Or do they learn from experience by responding to environmental cues, the presence or absence of certain stimuli, or even human behavioural cues? Udell and colleagues' work sheds some light on these questions.

Udell and team carried out two experiments comparing the performance of pet domestic dogs, shelter dogs and wolves given the opportunity to beg for food, from either an attentive person or from a person unable to see the animal. They wanted to know whether the rearing and living environment of the animal (shelter or human home), or the species itself (dog or wolf), had the greater impact on the animal's performance.

They showed, for the first time that wolves, like domestic dogs, are capable of begging successfully for food by approaching the attentive human. This demonstrates that both species - domesticated and non-domesticated - have the capacity to behave in accordance with a human's attentional state. In addition, both wolves and pet dogs were able to rapidly improve their performance with practice.

The authors also found that dogs were not sensitive to all visual cues of a human's attention in the same way. In particular, dogs from a home environment rather than a shelter were more sensitive to stimuli predicting attentive humans. Those dogs with less regular exposure to humans performed badly on the begging task.

According to the researchers, "These results suggest that dogs' ability to follow human actions stems from a willingness to accept humans as social companions, combined with conditioning to follow the limbs and actions of humans to acquire reinforcement. The type of attentional cues, the context in which the command is presented, and previous experience are all important." - (EurekAlert!, June 2011)