Surgical implements left behind inside patients 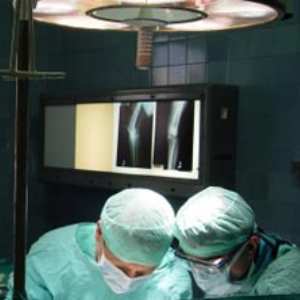 You go in for surgery, and only find out later that one of the surgeon's tools -- a sponge, a needle, a surgical implement -- has been left behind in your body.

A rare occurrence? Not really, according to the watchdog group The Joint Commission, which is urging hospitals across America to find better ways to avoid the problem of "retained surgical items".

"Leaving a foreign object after surgery is a well-known problem, but one that can be prevented," Dr Ana McKee, the commission's executive vice president and chief medical officer, said during an early afternoon press briefing Thursday.

Her group believes that this is an all-too-common problem – one that can even prove fatal or leave severe damage to patients, both physically and emotionally.

According to the commission, there have been more than 770 reports of retained foreign objects in surgical patients over the last seven years. These cases resulted in 16 deaths and in almost 95% of the cases patients had to have their hospital stay extended. The objects most often left inside patients include sponges and towels, broken parts of instruments, and stapler parts and needles or other sharp pieces.

"It is critical for organisations to develop and comply with policies and procedures to make sure all surgical items are identified and accounted for as well as to ensure there is open communication by all members of the surgical team about any concern," McKee said.

Certain patients or procedures seem more prone to having implements unaccounted for after surgery. According to McKee, these include overweight patients, more rushed or urgent procedures, having more than one surgical procedure and multiple surgical teams, or having staff turnovers during the procedure.

McKee noted that the 770 cases reported is probably only the tip of the iceberg and the actual number of these incidents may be closer to 1 500 to 2000 each year. These mistakes can also lead to financial outlay: According to the commission, leaving objects inside patients cost as much as $200,000 in medical liability payments for each case.

But there are ways to reduce the problem. Among the commission's recommendations:

Too often, "problems with hierarchy and intimidation in the surgical team, failure in communication with physicians, failure of staff to communicate relevant patient information and inadequate or incomplete staff education," are a part of the problem, the commission said.

If any discrepancy is found between the objects counted and those remaining after the surgery, action must be taken and placed into the record, the commission said.

According to the commission, the problem occurs nine times more often during emergency operations than in planned ones and was four times more likely to happen if the procedure was unexpectedly changed.

The Joint Commission is an independent, not-for-profit organization, the nation's oldest and largest standards-setting and accrediting body in health care.

For more information on patient safety, visit the US National Library of Medicine.

We live in a world where facts and fiction get blurred
In times of uncertainty you need journalism you can trust. For 14 free days, you can have access to a world of in-depth analyses, investigative journalism, top opinions and a range of features. Journalism strengthens democracy. Invest in the future today. Thereafter you will be billed R75 per month. You can cancel anytime and if you cancel within 14 days you won't be billed.
Subscribe to News24
Related Links
Discovery: spine surgery authorised
Drug to treat breast cancer before surgery
Plastic surgery won't improve your looks
Next on Health24
Study links menopausal night sweats to impaired thinking