What is Kim Kardashian doing to her waist?! If you remember what Kim Kardashian (KK) looked like during her pregnancy, you'd agree that it's almost miraculous that she's managed to get her body back.

Now it seems there's even less of her than ever before.

Hollywoodlife.com reported that KK gained nearly 50 pounds during her pregnancy but has lost around 43 pounds (around 20 kilograms) since the birth of her one year old baby North West.

She told US Weekly that she followed the Atkins Diet which, in essence, is a low-carb diet with a focus on lean meats and healthy fats.

Now, the reality star seems to have taken things a couple of steps further in her quest for the perfect hourglass figure by embarking on the latest craze called "the corset diet" or "waist training".

Waist training is inspired by Victorian times when women wore a tight corset for hours at a time, giving them a fashionable hourglass figure. Today women wear the corset to the gym where it's referred to as a "miracle waist shape" or "clincher" on the premise that "it burns fat by making you sweat".

This, of course, is complete nonsense. You may lose water through sweating, but not fat.

Improve your shape and posture

Other women wear the corset daily under their regular clothes. Called "Shapewear" it is manufactured by, among others, Ann Chery. It's also popular in South America where it's known as a faja or girdle.

The thinking behind this is that over time it will reduce the size of the waist and improve your shape and posture.

Though her sister Khloe has also jumped on the wonder-waist wagon, it seems this is not just a Kardashian trend. Beyonce is also known to have taken up the practice before, and Jessica Alba said she also wore it for three months after her pregnancy.

It involves wearing a specially-made corset for 3 - 5 hours a day, working up to 12 hours a day.

Image: Kim Kardashian, left pregnant at the MTV Movie Awards and right, earlier this year in a selfie she posted to Instagram showing herself at the gym in an extremely tight corset called 'shapewear'.

Is the concept new?

It actually isn't. Besides Victorian women who wore them as fashion statements, the concept of "binding" has been practiced for decades across the world, including in South Africa, by women who wanted to get their pre-pregnancy figures back.

They would "bind" (the word is the same in English and Afrikaans) their stomachs and waists using fabric nappies and safety pins and bind these tightly around their tummies. They'd do this for two months to flatten the stomachs and "get the organs' back to where they belong". It was especially popular after a C-section birth and, by all accounts, it worked.

On a sadder note, in the poorest communities in India, mothers bind their children's stomachs with sashes or rope to reduce the kids' hunger when they have no food to give them.

Read: 5 crazy diets you should avoid

The Dailybeast reports that companies that sell these waist cinchers say that the garment works by compressing the core and ramping up perspiration. The tight fit also restricts your abdomen, taking away hunger pangs and thereby reducing your food intake during the day.

Beverly Hills doctor Alexander Sinclair says hundreds of his patients are on the corset diet. It trains the waist to be smaller by compressing the bottom ribs up and in so doing makes the space between your ribs and hips look smaller. He told ABC News that women can lose up to 25 cm (6 inches) around their waist.

He also says that the extra layer and pressure causes wearers to sweat more, further adding to their weight loss. Other benefits reported is an improvement in posture, it lifts the breasts.

Besides the discomfort, experts warn that the compression restricts the lungs (making it hard to breathe) and can also cause joint pain and bruise the internal organs.

In a German TV quiz show (Hirschhausens Quiz des Menschen) Dr Eckhart von Hirshhausen demonstrated the effects of wearing a corset for an extended period of time. His conclusion, after doing an MRI scan of a woman wearing a corset, was that it trapped the intestines and slowed down digestion.

Image: Illustration of how wearing a corset affects the body and organs. Source unknown. 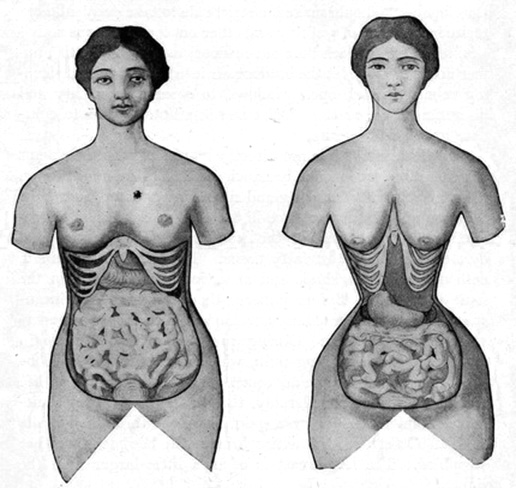 We live in a world where facts and fiction get blurred
In times of uncertainty you need journalism you can trust. For 14 free days, you can have access to a world of in-depth analyses, investigative journalism, top opinions and a range of features. Journalism strengthens democracy. Invest in the future today. Thereafter you will be billed R75 per month. You can cancel anytime and if you cancel within 14 days you won't be billed.
Subscribe to News24
Related Links
Waist circumference linked to diabetes risk
Kardashians and Bridezilla
The Eco Atkins Diet
Next on Health24
A woman's egg may prefer one man's sperm over another's