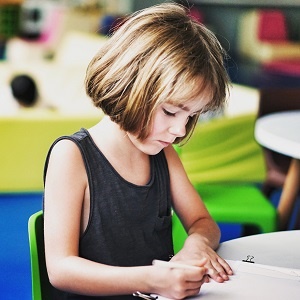 Children with ADHD may struggle to follow through on instructions.
Unsplash.com

There are three primary subtypes of attention-deficit hyperactivity disorder (ADHD): the primarily inattentive type, the primarily hyperactive/impulsive type, and the combined type with a number of co-existing disorders.

1. ADHD primarily inattentive type
Someone with this type of ADHD:

Clinically these individuals present as the classical dreamers. They’re disorganised and often live in their own little world, which leads to major problems with planning and task completion.

Children with these symptoms are more likely to present with low self-esteem, depression and even suicide than the other subtypes.

This is the most common form of ADHD among school-aged children, teenagers and adults. It’s usually not diagnosed early in childhood, and more likely to be diagnosed between 9 and 14 years of age.

2. ADHD primarily hyperactive/impulsive type
A person with this type of ADHD:

The classical hyperactive group are often a danger to themselves because of the impulsive behaviour. They often present at a very early age (often at four years of age). Most often, the prognosis cannot be accurately predicted at this early stage.

3. ADHD combined type
This is the most common subtype. These individuals meet both sets of inattention and hyperactive/impulsive criteria.

This type of ADHD is generally identified in Grade R when these children are not school ready, or in the lower grades when they’re unable to work independently or keep up with the workload.

Coexisting disorders
In studies, as many as 60% of individuals with ADHD present with at least one other major disorder (co-morbidity). The most common of these coexisting disorders are briefly described below.

Oppositional-defiant disorder (ODD):
This involves a pattern of arguing with multiple adults, losing one's temper, refusing to follow rules, blaming others, deliberately annoying others, and being angry and resentful.

Conduct disorder (CD):
CD is associated with efforts to break rules without getting caught. Such children may be aggressive to people or animals, destroy property, lie or steal from others, run away, be truant from school, or break curfews. CD is often described as delinquency.


Depression:
ADHD is often associated with depression, which usually appears after ADHD has developed. Depression is characterised by sadness (a child may cry frequently and for no apparent reason), social withdrawal, loss of appetite, self-recrimination, insomnia or excessive sleeping, and a loss of interest in activities that were previously enjoyed.

Bipolar disorder
This disorder may present with symptoms of ADHD in the pre-pubertal child. A family history of bipolar disorder is an important indicator. This disorder takes the form of periods of abnormally elevated mood (mania) alternating with episodes of depression. In children, the manic phase can manifest as pervasive irritability and unprovoked aggression. Signs that may alert one that bipolar disorder should be considered are bouts of major aggression with indescribable physical power, severe moodiness on wakening, hyper-sexuality, and worsening of ADHD symptoms when the child is put on stimulant medication.

The manic phase in adults is usually characterised by an expansive mood: the person feels euphoric and extremely confident. He or she may go for days without sleeping, tends to speak rapidly and incessantly, and is inclined to behave inappropriately in social settings (having lost their normal inhibitions). During a manic phase, these individuals often develop an unrealistic belief in their capabilities. As a result, they engage in activities or projects that are doomed to fail and which often lead them into financial or other difficulties.

Anxiety
Approximately one third of children with ADHD also have an anxiety disorder. People with anxiety disorders often worry excessively about a number of things and may feel edgy, stressed out, tired and tense. They may also have trouble getting restful sleep. In children, it often presents with irritability and acting-out behaviour.

A small number of individuals report brief episodes of severe anxiety (panic attacks) with complaints of a pounding heart, sweating, shaking, choking, difficulty breathing, nausea, stomach pain, dizziness, and fears of going crazy or dying. These episodes may occur for no reason.

c. Tourette's disorder
About 7% of people with ADHD have Tourette's disorder, which involves motor and vocal tics. Tics are sudden, rapid, recurrent, non-rhythmic, involuntary movements or vocalisations. The diagnosis of ADHD may precede the onset of tics. These individuals may also present with obsessive compulsive disorder (OCD).

d. Learning disabilities
About 60-75% of individuals with ADHD have some form of learning disability. Learning-disabled persons may have a specific problem reading or calculating, but usually have normal IQ.

e. Substance abuse
Research suggests that adolescents with ADHD are at increased risk for very early cigarette use, which is likely to be followed by alcohol and drug abuse if their symptoms aren’t controlled.

We live in a world where facts and fiction get blurred
In times of uncertainty you need journalism you can trust. For 14 free days, you can have access to a world of in-depth analyses, investigative journalism, top opinions and a range of features. Journalism strengthens democracy. Invest in the future today. Thereafter you will be billed R75 per month. You can cancel anytime and if you cancel within 14 days you won't be billed.
Subscribe to News24
Related Links
Behaviour training for ADHD
Who gets ADHD?
Ambitious parents put ADHD kids on meds
Next on Health24
Causes of ADHD