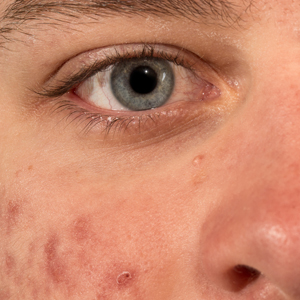 Shutterstock
For many women, acne disappears along with the other scourges of adolescence.

"But for 12 % of women, adulthood is when their skin problems start, or get worse," says Dr Isak Marais, a Cape Town dermatologist.

What causes acne in older women?

“Mostly hormonal imbalances, of which most women have experience when they are premenstrual or when they are having their periods. Oestrogen and testosterone imbalances occur very easily and can be caused by a myriad of things, including stress, polycystic ovaries and medication prescribed for other things.

In some women, the fitting of an IUD device or the taking of Depo Provera, the contraceptive injection, can lead to an outbreak of acne," says Marais.

He added that hormonal imbalances lead to an overproduction of sebum, an oily secretion of the skin, and this clogs up the pores, causing both blackheads and whiteheads.

“Many women develop acne for the first time in their thirties, when they elect to go off the contraceptive pill, for whatever reason. The pill suppresses outbreaks of acne and women could be quite unaware of the fact that they have this condition until they stop taking oral contraceptives,” according to Marais.

Certain types of Vitamin B supplements could also be a cause of acne, as can certain Vitamin-E-based face creams.

There are many other types of skin conditions that are often mistaken for acne, such as peri-oral dermatitis, acne rosacea and keratosis. But a visit to a dermatologist should quickly identify the source of skin problems.

There are three things, according to Marais, that sort out most cases of adult onset acne in women. These are the taking of the Pill, antibiotics and Vitamin A treatments.

Antibiotics should not be seen as a long-term solution, and is not recommended for more than 3-6 months at a time.

“Vitamin A treatments, such as Retinol, have proved to be as effective as the original clinical tests showed. These actually renew the skin, by getting it to form collagen, thereby not only leading to a more youthful appearance, but also to the partial restoration of acne-scarred skin tissue,” according to Marais.

He stated that women have many more options of treatment today than a few decades ago and chances are that a visit to a dermatologist could help not only to discover the cause of skin problems, but also effect a cure.

We live in a world where facts and fiction get blurred
In times of uncertainty you need journalism you can trust. For only R75 per month, you have access to a world of in-depth analyses, investigative journalism, top opinions and a range of features. Journalism strengthens democracy. Invest in the future today.
Subscribe to News24
Related Links
How a pimple is born
Top 13 acne tips
Next on Health24
What is acne?