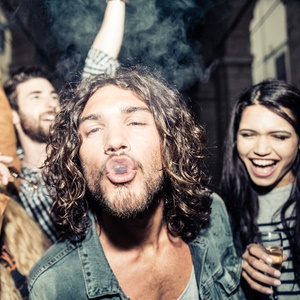 Smart students usually know better than to light up a cigarette. But when it comes to drinking alcohol or smoking marijuana, these same whiz kids are likely to let their better judgement take a backseat to "party" time.

In the light of the fact that South Africa may soon legalise dagga for medicinal purposes, experts are warning that we might be making hasty decisions that can lead to long-term abuse, especially among young people.

Dr Shaquir Salduker, board member of the Psychiatry Management Group (PsychMG) says he believes the proposed legislation of dagga requires review and thorough research, which to date has not been done.

“We simply don’t have enough research to understand the complexity of the substance to say it’s safe to use in the long term,” Salduker told Health24.

“If we legalise it as a medication, young people will start to think it is okay to use cannabis, and this is extremely dangerous to children, adolescents and young adults. Their brains are still developing and the harmful effects of dagga on their development have been proven.”

“I have young people who develop psychosis and schizophrenia because of abuse and then they refuse to take medication, because they read about the health benefits.”

New research from the United Kingdom revealed that students who excel in English, maths and science appear to be less likely to smoke cigarettes than those with poorer results. But smart teens are more likely than their less-brainy peers to knock back some drinks or smoke dagga.

The study, led by James Williams of the University College London, UCL Medical School, included about 6,000 students, starting at the age of 11. The kids came from nearly 900 schools in England.

Until they reached the age of 19 or 20, all of the study participants regularly completed behavioural questionnaires, which included questions regarding use of tobacco, alcohol and marijuana.

Academic success was gauged by scores registered on a national British test that measures achievement in English, maths and science, the study authors noted.

While still in their early teens, smarter students reported less tobacco use, but drank more alcohol than lower-scoring students. The academically gifted were also more likely to report using pot, but at levels that weren't deemed statistically significant. The researchers stressed that this study didn't find a cause-and-effect relationship. It was only designed to find an association between academic performance and substance use.

The study was published online in the journal BMJ Open.

The investigators pointed out in a journal news release that their findings are similar to those reported in adults.

The results of the new research suggest that patterns of alcohol and drug experimentation seen among early teens don't appear to be a passing phase.

Instead, the study authors concluded that the findings provide "evidence against the hypothesis that high academic ability is associated with temporary experimentation with substance use".

Dagga may cause relapse in psychosis sufferers

We live in a world where facts and fiction get blurred
In times of uncertainty you need journalism you can trust. For 14 free days, you can have access to a world of in-depth analyses, investigative journalism, top opinions and a range of features. Journalism strengthens democracy. Invest in the future today. Thereafter you will be billed R75 per month. You can cancel anytime and if you cancel within 14 days you won't be billed.
Subscribe to News24
Related Links
Legal marijuana unlikely to tempt more kids
Doctors' treatments may vary according to political bias
More adults starting to use marijuana in US
Next on Health24
News of tragic death involving excessive drinking again shines light on SA's alcohol problem