What if your allergies were 'all in your head'? 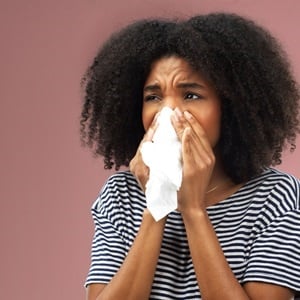 Allergies are costing the economy millions each year – but what if they weren't real?

Allergies, regardless of the type, aren’t fun to live with and can greatly affect your quality of life. Allergies were relatively unknown until the 20th century, but it’s estimated that in some countries approximately 25% of people currently suffer from some form of allergy. In fact, it’s been labelled the “epidemic of the 21st century”. But could allergies, at least to a certain extent, be "all in our heads"?

Doctors have long suspected a connection between allergies and the psyche, notes the New York Times, citing a 1940s case where doctors found that allergic patients could be tricked into experiencing allergy attacks. One doctor exposed a patient to a goldenrod plant, the article explains, without informing the patient that the plant was artificial. The result? The patient developed sneezing, a runny nose and nasal congestion. Once the patient realised the doctor’s deception, their symptoms quickly disappeared.

The article also mentions a 1990s British survey that noted a high incidence of apparently psychosomatic symptoms among allergic patients. In the survey of 10 000 people, 20% indicated allergic symptoms, but fewer than 2% reacted to the foods when a formal skin test was conducted.

“For example, if you have a mild peanut allergy, your throat may become slightly irritated and constricted. You may then become very anxious and start panicking, exacerbating the whole event and feeling like you're about to die (without it actually happening). This is largely due to the panic, which releases cortisol and makes the reaction feel worse than it actually is.

“Merely viewing a plastic rose by a rose-allergic person could not set off an allergic reaction. But because of past experiences, they may have a panic attack when they see the plastic rose (which they mistake for a real rose).”

This isn’t truly an allergic reaction, but a "panic attack", which poses no real danger to their health other than the unpleasant experience, explains Dr Morris.

Another study published this year assessed the prevalence of food allergies among US adults. It showed that in a survey of 40 433 adults, roughly half the participants self-diagnosed themselves with a food allergy that may not actually be an allergy, but rather a food intolerance or something else entirely.

For example, milk allergies were selected by 1.9% of the survey respondents, but the lead author of the study, Professor Ruchi Gupta from Northwestern University’s Feinberg School of Medicine, explained that people often report bloating, pain, or diarrhoea after drinking milk, attributing their reaction to a milk allergy, when these symptoms actually indicate lactose intolerance.

The data concluded that while only 10% of US adults are food allergic (with only 5% estimated to be physician-diagnosed), nearly 20% believe that they have a food allergy. These participants revealed that they had been avoiding certain foods all their lives because of adverse reactions, Gupta explained.

According to practitioners, far more people think they have an allergy than actually do, and allergists suggest numbers could be rising as a result of the "worried well" – entirely healthy people who visit a doctor just to be assured that they don't need any medical treatment.

When it comes to your allergies, symptoms may not always be the result of a psychosomatic reaction, but scientists have discovered that stress and allergies are a bad combination. If you have frequent allergy flare-ups, your emotional stress could be precipitating your allergic reactions. This is because stress releases hormones and chemicals, such as histamine, into your bloodstream, and histamine tends to lead to allergy symptoms.

It’s a message South Africans need to hear because the cost of allergies to our economy is in excess of R606 million a year, reports Pharma Dynamics – exacerbated by the fact that the country was recently ranked as one of the world’s most stressed nations.

While alleviating stress won’t necessarily cure your allergies, it may help to decrease the intensity of the symptoms. If you feel like you can’t escape from your allergies, relaxation techniques and hypnotherapy are some of the stress relief strategies you can try to moderate allergy symptoms, Dr Andrew Weil, a Harvard-trained physician explained to HowStuffWorks.

In short: Allergies aren’t all in your head, but it is possible for allergic reactions to be triggered by emotional factors. Stress and anxiety can also worsen allergy symptoms, but calming the mind can help ease these symptoms. And, if you suspect you suffer from an allergy, it's best to avoid the self-diagnosis route – the only way to know for sure is to get tested by an allergist.

We live in a world where facts and fiction get blurred
In times of uncertainty you need journalism you can trust. For 14 free days, you can have access to a world of in-depth analyses, investigative journalism, top opinions and a range of features. Journalism strengthens democracy. Invest in the future today. Thereafter you will be billed R75 per month. You can cancel anytime and if you cancel within 14 days you won't be billed.
Subscribe to News24
Related Links
Woman with fatal allergy to the cold speaks out after people think it’s a joke
Do itchy, burning eyes mean you have an allergy?
4 ways to protect your child from allergic reactions at school
Next on Health24
5 life-saving dating tips for highly allergic people