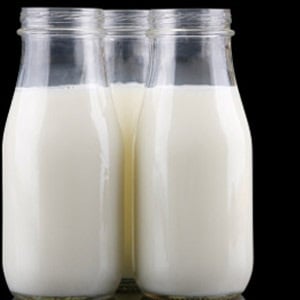 A specific protein in milk known as beta-lactoglobulin is able to initiate an allergy only when being devoid of iron. Loaded with iron, the protein is harmless.

The scientists discovered the same mechanism recently with regard to birch pollen allergy. Their findings help to decipher allergic reactions and were published in the journal PLoS ONE.
Milk allergy is frequently confused with lactose intolerance. However, these are two entirely different mechanisms that occur in the body. People with lactose intolerance do not digest lactose properly because they lack an enzyme known as lactase.

In the case of the potentially much more dangerous cow milk allergy, however, the body's immune system attacks milk proteins with its own IgE antibodies.

According to statistics, about two to three percent of children in Europe suffer from a genuine milk allergy. Fewer adults are diagnosed with the disease. The formation of so-called Th2 lymphocytes is initiated in these patients.

Th2 lymphocytes contribute in great measure to the production of IgE antibodies to milk proteins. Hence, people develop an allergic reaction to milk.

Such an allergy may cause swelling of the mouth and mucous membranes, diarrhoea, exacerbation of neurodermitis, and in rare cases even an allergic shock. Precise diagnostic investigation helps to differentiate between allergy and intolerance and thus avoid incorrect diets which, under certain circumstances, may cause malnutrition.

One of the most important milk allergens, the so-called beta-lactoglobulin, belongs to the protein family of lipocalins. Lipocalins possess molecular pockets which are able to accommodate iron complexes. Iron is bound to the protein by so-called siderophores. The first author Franziska Roth-Walter and her colleagues now show that an "empty" milk protein, one without iron and siderophores, helps to activate Th2 lymphocytes.

Read: How much milk and dairy should we eat?

As a consequence, the production of IgE antibodies against the milk protein is stimulated. The patient gets sensitized and may develop an allergic reaction to milk. Roth-Walter, working at the department of Comparative Medicine at the Messerli Research Institute says: "Knowledge of the molecular structure of allergens has contributed very significantly to our conclusion about milk allergy. This is of enormous practical relevance."

Difference between organic and conventional milk

As the next step the scientists want to find out, what contributes to the iron load of milk proteins. The lead investigator Erika Jensen-Jarolim explains: "One of the most burning questions we want to answer is: Why are these milk proteins loaded to a greater or lesser extent with iron? The manner of keeping and feeding cows may be a factor involved in this phenomenon.

Iron loading may depend on whether the milk is produced organically or conventionally. This will be one of our major interests in the future. Lipocalins exist in all mammals. We assume that our conclusions will be applicable to the milk of other mammals as well."

The article "The major cow milk allergen Bos d 5 manipulates T-helper cells depending on its load with siderophore-bound iron”, by Franziska Roth-Walter, Luis. F. Pacios, Cristina Gomez-Casado, Gerlinde Hofstetter, Georg A. Roth, Josef Singer, Araceli Diaz-Perales and Erika Jensen-Jarolim was published on the 12th of August in the journal PLoS ONE.

See breaking news and the hottest health tips before anybody else by joining South Africa’s biggest and best health community, like health24 on Facebook now!
We live in a world where facts and fiction get blurred
In times of uncertainty you need journalism you can trust. For 14 free days, you can have access to a world of in-depth analyses, investigative journalism, top opinions and a range of features. Journalism strengthens democracy. Invest in the future today. Thereafter you will be billed R75 per month. You can cancel anytime and if you cancel within 14 days you won't be billed.
Subscribe to News24
Next on Health24
THE REAL POLLEN COUNT: Slight relief for allergy sufferers in CT, but high counts persist