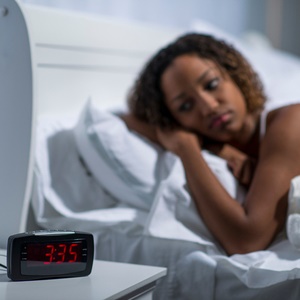 People with chronic sleep struggles were three times more likely to develop asthma than those without insomnia, researchers at the Norwegian University of Science and Technology found.

Read: Asthma: a needless killer of our time

"Insomnia, defined as having difficulties initiating or maintaining sleep, or having poor sleep quality, is common among asthma patients, but whether insomnia patients have a higher risk of developing asthma at a later stage has not been thoroughly investigated," said study co-author Linn Beate Strand.

The study included data from nearly 18,000 people, aged 20 to 65, in Norway. The researchers found that people who said they had difficulty falling asleep "often" or "almost every night" had a 65 percent and 108 percent increased risk, respectively, of developing asthma over 11 years.

People who said they woke too early and couldn't get back to sleep "often" or "almost every night" had a 92 percent and 36 percent increased risk, respectively, of asthma. And those who had poor quality sleep at least once a week had a 94 percent increased risk of developing asthma, the findings showed.

However, the study doesn't prove a cause-and-effect relationship between insomnia and asthma. Further research is required to confirm the findings, Strand said.

"As insomnia is a manageable condition, an increased focus on the adverse health effects of insomnia could be helpful in the prevention of asthma," Strand said in a news release from the European Lung Foundation.

According to study lead author Ben Brumpton: "A key finding in our study is that those people with chronic insomnia had more than three times the risk of developing asthma, compared to those without chronic insomnia, which suggests that any changes in the body due to insomnia may accumulate and result in more severe harmful effects on the airways."

Read: What if you have an asthma attack and no inhaler?

Brumpton is also affiliated with Norway's Trondheim University Hospital, in the department of thoracic and occupational medicine.

Recent research also suggests that depression and anxiety may be associated with adults' risk of developing asthma, according to background notes with the study.

The study was published in the European Respiratory Journal.

We live in a world where facts and fiction get blurred
In times of uncertainty you need journalism you can trust. For 14 free days, you can have access to a world of in-depth analyses, investigative journalism, top opinions and a range of features. Journalism strengthens democracy. Invest in the future today. Thereafter you will be billed R75 per month. You can cancel anytime and if you cancel within 14 days you won't be billed.
Subscribe to News24
Related Links
SEE: What does your asthma inhaler consist of?
Antacids during pregnancy may cause asthma in babies
Underprivileged asthmatics face tough challenges
Next on Health24
WATCH: 7 odd things that can trigger this attack