Balanced diet may be key to cancer survival 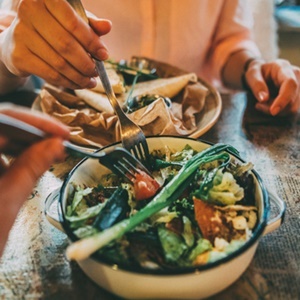 Without good nutrition, your body is more prone to disease and infection.

According to CANSA, 100 000 South Africans are diagnosed with cancer each year with a survival rate of six out of ten.

Eating a nutritionally balanced high-quality diet may lower a cancer patient's risk of dying by as much as 65%, new research suggests.

The finding that total diet, rather than specific nutritional components, can affect a cancer patient's prognosis "was particularly surprising to us," said the study's lead author, Ashish Deshmukh.

Total diet, he explained, was one that appeared to be "balanced" and "nutrient-rich" with a wide variety of vegetables, fruits, whole grains, proteins and dairy.

The findings were published in the journal JNCI Cancer Spectrum.

Deshmukh is an assistant professor with the University of Florida's College of Public Health and Health Professions. To explore the impact of nutrition on cancer, the researchers sifted through data collected between 1988 and 1994 by the Third National Health and Nutrition Examination Survey (NHANES III). Almost 34 000 people were included in the survey, which asked all participants to offer up a 24-hour diet diary.

The team then used the US Department of Agriculture's (USDA) "Dietary Guidelines for Americans" as a yardstick for ranking the nutritional quality of the diets used by 1 200 people who had been diagnosed with cancer.

In turn, all 1 200 patients were then tracked for an average of 17 years, with researchers verifying all subsequent deaths, up to 2011, through the US National Center for Health Statistics Linked Mortality Files.

By that point, half the cancer patients had died. Deshmukh noted that the investigation did not assess the exact length of the survival benefit, nor did the researchers explore how exercise or other types of healthy behaviour may impact cancer outcomes. Only an association was seen between diet and death risk, not a cause-and-effect link.

But the researchers noted that the overall strength of the protective benefit of eating well held up even after digging deeper to look at the specific risk of dying from certain types of cancer, including skin cancer and breast cancer.

"There are no harms from healthful eating," he added.

Importance of a tailored nutritional diet

Marjorie Lynn McCullough is a senior scientific director of epidemiology research with the American Cancer Society. She noted that the "study had some limitations, such as not controlling for smoking, and evaluating older nutrition guidelines which have since been modified". She was not involved with the study.

But, she added, the findings are "generally consistent with growing evidence supporting recommendations to eat a healthy diet for cancer survivors".

Like the guidelines for cancer prevention, McCullough said, that means lowering the intake of sugar and empty calories by consuming "a mostly plant-based diet, including a variety of vegetables, whole fruits and whole grains, in addition to exercise and achieving and maintaining a healthy body weight.

"However, nutrition needs can vary during treatment, recovery and over the long term," she cautioned, "so cancer survivors should work with their health care practitioner to tailor advice on nutrition and physical activity to their situation."

We live in a world where facts and fiction get blurred
In times of uncertainty you need journalism you can trust. For only R75 per month, you have access to a world of in-depth analyses, investigative journalism, top opinions and a range of features. Journalism strengthens democracy. Invest in the future today.
Subscribe to News24
Related Links
How to communicate with your kids about nutrition
Top 5 common vitamin and mineral deficiencies in SA
Foods you need to fuel your brain
Next on Health24
Weight loss can help prevent endometrial cancer