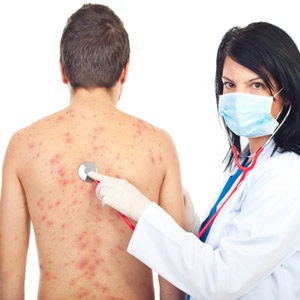 Adult male with chicken pox being examined by a doctor.
Shutterstock

Chickenpox befell Angelina Jolie this week, preventing the actress-turned-director from attending the premiere of her new film.

Meanwhile, an outbreak of mumps has hit the National Hockey League, side-lining more than a dozen players and two referees.

These are considered kids' diseases. Most adults have vivid, fretful childhood memories of standing in line to get vaccinations that they expected to provide lifetime protection.

Why, then, are these prominent adults – and scores of faceless others – coming down with these infections?

Mainly, it comes down to two factors, experts say.

Vaccination rates have declined among children in some parts of the United States, increasing everyone's risk of exposure to virulent diseases like chickenpox, measles, mumps and whooping cough, said Dr. Aaron Glatt, a spokesman for the Infectious Diseases Society of America.

Vaccines are not perfect

"These vaccines are not perfect," said Glatt, who's also executive vice president of Mercy Medical Centre in Rockville Centre, New York. "If you don't have a perfect vaccine and you couple that with a less-than-ideal number of people getting it, then if one person gets it then it's more likely to spread to others."

On top of that, even adults who got their shots as kids are at risk of contracting these diseases once exposed to them, because the protection provided by childhood vaccinations can fade over time.

"You can be vaccinated for something and have antibodies that wane over time or disappear entirely," said Dr. Len Horovitz, an internist and lung specialist at Lenox Hill Hospital in New York City. "You can have intermittent immunity, or no immunity."

If enough people are vaccinated against diseases like chickenpox, influenza, mumps and whooping cough, then even those who aren't vaccinated benefit because those who are immune can't spread the disease.

Skepticism over the effectiveness and safety of vaccines has caused vaccine rates to decline in some parts of the country, Horovitz and Glatt said. In those locations, adults with waning or imperfect immunity could fall prey to childhood infectious diseases, particularly if there's an outbreak.

"There is less vaccination going on than there was previously," Glatt said. "These childhood diseases have not gone away, and there is a strong anti-vaccine lobby that plays a role in people's decision to have their children vaccinated."

Since the early 1980s, there has been an overall increasing trend of whooping cough in the United States, said Angela Jiles, a spokeswoman for the federal Centres for Disease Control and Prevention.

Between 1 January and 16 August this year, the CDC received reports of 17 325 cases of whooping cough, a 30 percent increase from the same time period in 2013 and the most cases seen in six decades, Jiles said.

California is experiencing its worst outbreak of whooping cough in seven decades.

There have also been more reported mumps cases in the United States this year, due to some larger outbreaks, according to the CDC. A reported 1 078 people have contracted mumps in 2014, compared with 438 the year before.

In 2006 – the worst year in recent history – there were 6 584 cases of mumps, largely due to outbreaks on college campuses, according to the CDC.

No one has said how Jolie might have contracted chickenpox, but many of the NHL players appear to have gotten mumps from each other, despite efforts by the hockey league to get players vaccinated.

"There is no vaccine that's 100 percent effective," Fiebelkorn said. "There is some margin for fully vaccinated individuals to still be infected with mumps if they're exposed to the virus."

Adults in for a rougher ride

Unfortunately, adults who contract these diseases are in for a rougher ride than children. They are more likely to develop serious complications, and are at higher risk of death, Glatt and Horovitz said.

These viruses also can increase a person's risk of future illness. For example, chickenpox patients like Jolie have a lifetime risk of shingles, a disease that can cause terrible rashes and intense nerve pain.

The chickenpox virus hides in deep reservoirs inside the human body, and then emerges later in life to cause shingles.

Concerned adults can ask their doctor for a blood test that will check their antibodies and see if they remain immune to these infectious diseases, Horovitz said.

"It's something that could be done in the course of your annual exam. It takes no more than an extra tube or two of blood," the same as regular checks for blood sugar and cholesterol, he said.

Read: Asthma in pregnancy may cause sickly offspring

"It would be particularly important for people with chronic medical conditions or who do a lot of foreign travel where these diseases are running rampant."

People also can talk with their doctor about vaccinations that are recommended for adults. For example, the CDC recommends that adults get a booster shot every 10 years for tetanus, diphtheria and whooping cough, as well as an annual flu shot.

We live in a world where facts and fiction get blurred
In times of uncertainty you need journalism you can trust. For only R75 per month, you have access to a world of in-depth analyses, investigative journalism, top opinions and a range of features. Journalism strengthens democracy. Invest in the future today.
Subscribe to News24
Next on Health24
Baby with ‘water on the brain’ fights to stay alive