Call to action: You can help end SA’s TB epidemic A TB screening campaign driven by the national department of health. (Image: Supplied)

Tuberculosis (TB) is one of the leading causes of deaths in South Africa and that is why everyone is being encouraged to get screened.

The Department of Health is calling upon all South Africans to take action and present themselves for screening in health facilities as well as during community campaigns in their areas.

"A TB free South Africa is possible with everyone’s commitment and participation in the TB screening campaigns," it said in a statement.

TB is an infectious bacterial disease that is caused by a germ that most commonly attacks and damages the lungs. It can be easily passed to others.

When an infected person coughs, sneezes or spits saliva onto the ground, the germs are spread into the surrounding air and remain there for a long time. If you inhale that air, you can breathe in the germs and get infected.

Despite government efforts to increase screening and testing, introducing new tests and second line TB medicines,  the ongoing transmission of TB in communities has not been curtailed.

"TB remains one of the major diseases of public health importance with more than 300 000 cases reported annually," said the department.

"This is compounded by the high HIV burden with co-infection rates estimated at 62 percent.  South Africa is one of the 22 countries with the highest burden of TB which contribute 80 percent of the total global burden of all TB cases."

On World TB Day the government announced plans to curb the scourge of TB by launching a campaign under the theme Ending South Africa’s TB epidemic.

As part of this, the department of health is targeting high risk groups such as inmates, miners, informal settlements, people living with HIV, pregnant women, children and diabetics to be screened. 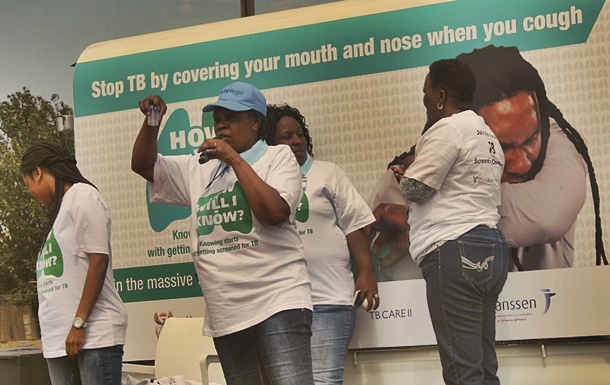 Image: A TB screening campaign driven by the national department of health. (Supplied)

It said The How will I know? TB campaigns are presently being run in communities across the country.

"The population is not only screened for TB but also tested and those found to have TB immediately put on treatment," said the department.

We live in a world where facts and fiction get blurred
In times of uncertainty you need journalism you can trust. For only R75 per month, you have access to a world of in-depth analyses, investigative journalism, top opinions and a range of features. Journalism strengthens democracy. Invest in the future today.
Subscribe to News24
Related Links
Coughing up blood: when should you be concerned?
MPs shun public TB testing
TB: the side only doctors see
Next on Health24
Bee healthy: Honey may beat cold meds against cough