Dialysis linked to dementia in seniors 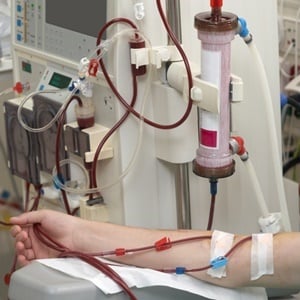 Dialysis is used to purify the blood of people whose kidneys are no longer working properly.

Older kidney failure patients on haemodialysis have high rates of dementia, which is associated with an increased risk of early death, a new study shows.

Researchers analysed data from nearly 357 000 dialysis patients aged 66 and older and found their risk of being diagnosed with dementia one and five years after starting dialysis was 4.6% and 16% among women, and 3.7 and 13% among men.

Their respective risks of being diagnosed with Alzheimer's disease were 0.6% and 2.6% among women, and 0.4% and 2% among men.

The study authors estimated that the risk of dementia diagnosis within 10 years of starting dialysis is 19% for patients aged 66 to 70, and 28% for those aged 76 to 80.

Dialysis patients at highest risk for dementia and Alzheimer's disease were found to be over the age of 86, black, female and in a nursing home or other institution.

The researchers also found that dialysis patients with dementia or Alzheimer's disease had a twofold higher risk of dying early.

Dialysis is the process of using a machine to purify the blood of people whose kidneys are no longer working properly. 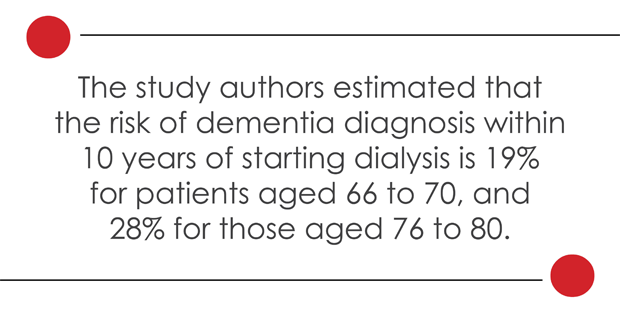 The study was published in the Clinical Journal of the American Society of Nephrology.

"We wanted to shed light on the high burden of diagnosed dementia in older patients with kidney failure who initiate haemodialysis," Dr Mara McAdams-DeMarco, from Johns Hopkins Bloomberg School of Public Health, said in a journal news release.

We live in a world where facts and fiction get blurred
In times of uncertainty you need journalism you can trust. For 14 free days, you can have access to a world of in-depth analyses, investigative journalism, top opinions and a range of features. Journalism strengthens democracy. Invest in the future today. Thereafter you will be billed R75 per month. You can cancel anytime and if you cancel within 14 days you won't be billed.
Subscribe to News24
Related Links
850 million people worldwide have this hidden disease
The potential danger of catheters used in dialysis
Walking may benefit dialysis patients
Next on Health24
Your walking speed could predict future dementia