1 in 4 SA workers suffers from depression 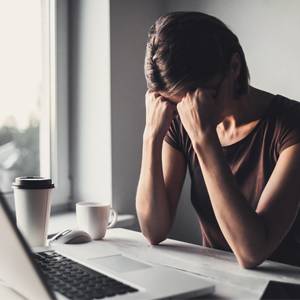 Depression has a negative effect on the South African economy.

A recent study conducted by The South African Depression and Anxiety Group (SADAG) in partnership with Hexor, with the support of Lundbeck, indicates that depression affects one in four South African employees.

People aged between 25 and 44 are most affected by depression and take more than 18 days per annum off work because of it. The IDEA study of the London School of Economics and Political Science 2016 says this costs the South African economy more than R232 billion (or 5.7% of the country’s GDP) as a result of lost productivity, either due to absenteeism or attempting to work while feeling depressed.

Health24 previously quoted Dr Sebolelo Seape, chairperson of the Psychiatry Management Group, who said that more than 9.7% of the South African population (or 4.5 million to be exact) were suffering from depression. That means there's a good chance the person who sits next to you has had to cope with depression at some point in their lives.

Given the shocking statistics, what should companies be doing to handle mental illness in the workplace?

Depression is a medical condition

Psychiatrist and leadership lecturer at the University of Stellenbosch Business School (USB), Dr Renata Schoeman, says that more than 40% of all work-related illness is due to work-related stress, major depression, burnout and anxiety disorders.

She recently presented at a Corporate Mental Health Awareness seminar at USB and said companies need to realise the significance their structure, expectations of employees and management style have on the company’s annual turnover, overall productivity and the risk of employees developing health problems that could prevent them temporarily or permanently reentering the workforce. Non-disclosure of depression as a reason for sick leave in the workplace often arises due to the stigma that comes with the condition. Employees also fear losing their jobs.

In 2017 SADAG released stats following a survey to find out what the impact of mental illness has in the workplace. The results were shocking.

“The cognitive symptoms of depression, such as difficulties concentrating, making decisions and remembering, are present 94% of the time during an episode of depression. Since leaders find themselves in roles of decision-making and responsibility, they are more prone to presenteeism. They would be less able to cope with the demands of their position, and as a leader their condition whilst at work would have a major impact on inter-office relationships, decision-making and their ability to manage their teams.”

She says it is imperative that companies understand the leading role they play in reducing or eradicating possible stressors at work.

A supportive culture is needed

Although policies and guidelines are necessary in the workplace, Dr Schoeman says that alone will not make a difference. Instead, companies need to foster a supportive culture of understanding and acceptance around mental illness.

“Stigma, born out of ignorance, prejudice or fear, is a major problem in the workplace, creating a situation where employees choose to rather suffer in silence. One can understand their reluctance to seek support or report their condition, especially in the current economic climate where they might fear losing their job. As a result mental health problems often go undiagnosed and untreated, not only to the detriment of the individual’s career and health but also directly impacting the workplace’s bottom line.”

Dr Schoeman says mental health awareness in the workplace will ensure early identification and treatment of disorders, prevent recurrence and long-term complications. Implementing employee assistance programmes will help improve the quality of life for employees, while the longevity of the company will see a lesser loss to the country’s GDP and prevent disorders from becoming permanent disabilities.

How does your company handle mental illness in the workplace? Do you have an employee assistance programme at your company? Have you used it? Email mandy.freeman@24.com to share your story.

We live in a world where facts and fiction get blurred
In times of uncertainty you need journalism you can trust. For 14 free days, you can have access to a world of in-depth analyses, investigative journalism, top opinions and a range of features. Journalism strengthens democracy. Invest in the future today. Thereafter you will be billed R75 per month. You can cancel anytime and if you cancel within 14 days you won't be billed.
Subscribe to News24
Next on Health24
Loneliness can kill more people than obesity