Control your breathing to manage anxiety 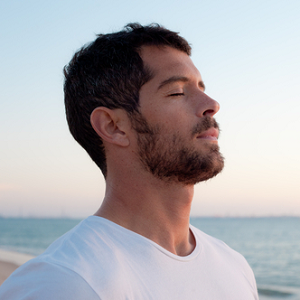 If you suffer from an anxiety disorder and you feel that the way you manage your anxiety is less than ideal, you may want to try to practise controlled breathing daily. There are at least three ways in which slower abdominal breathing helps to prevent and control the symptoms of anxiety:

First – it reverses the symptoms that are the direct result of anxious (rapid, shallow) breathing – symptoms such as dizziness, shakiness, confusion and blurred vision.

Second – it indirectly affects other symptoms that come with anxiety – symptoms most of us can’t control directly, such as heart rate.

Third – there’s evidence that those who struggle with anxiety tend to chronically over-breathe – and that this chronic over-breathing reduces their bodies capacity to ‘buffer’ or absorb small increases in anxiety. Practising controlled breathing on a regular basis may normalise their symptoms, making them less susceptible to small urges of anxiety. Keep in mind too that over-breathing can play role in anxiety symptoms without your full awareness.   Has this ever happened to you? You’re going about your day, experiencing various events but still not feeling particularly anxious. Suddenly, you’re lightheaded, your hands begin to tingle, things take on an unreal quality, and you begin to panic.

Chances are, your body was reacting to those events by over- breathing, even though you weren’t consciously aware of any anxiety.  You experienced the physical results of that over-breathing, the symptoms of anxiety – which occurs just as reliable whether or not you’re aware of any chances in your respiration.

Although not everyone finds controlled breathing strategies helpful, the large majority will- which makes it worth a try for anyone with problems with anxiety. If you haven’t found a method of controlled breathing that works for you; you might seek help from a therapist experienced in the treatment of anxiety, from a physical therapist or someone who teaches relaxation or meditation, or consider using a good self-help book or tape on anxiety or stress management.

Some additional tips for controlled breathing:

- Take at least four seconds to inhale, and when you do, inhale through your nose.

- During your practice sessions and when using controlled breathing deliberately in a stressful situation, try taking twice as long to exhale as to inhale.  Remember, inhaling is an active process, while exhaling should be a matter of allowing the air to escape, which naturally takes longer.

- Try pursing your lips as you exhale, as though you’re whistling.  There’s evidence that this improves the effectiveness of controlled breathing, probably because it helps to slow respiration rate.

- Finally once you’ve mastered the technique, remember to increase your skill level by participating in variable positions and while performing different activities.

Music and massage can ease anxiety

Image: Deep breathing in front of the ocean from Shutterstock