Can online treatment replace your therapist? 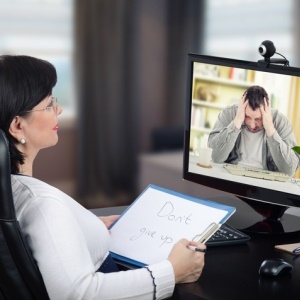 Many barriers can keep people from psychotherapy, such as cost or the availability of a qualified health provider.

As reported in a Health24 article, with the world of technology fast evolving, more and more people are seeking help on the internet, in the form of online therapy.

Samuel Waumsley, a clinical psychologist from Cape Town, South Africa, is the founder of a website which offers various online therapy programmes. He says that sessions are 50 minutes and follow the same course as a regular therapy conversation in a psychologist’s office.

And now new research is confirming that such online therapy programmes can help some people with mild to moderate depression.

A recent American study study found the results lasted at least three to six months after therapy ended, and the programmes don't necessarily need to have a therapist directly involved to produce benefits.

"There was a significant effect in decreasing depressive symptoms after completing the programmes," said study lead author Dr Charles Koransky. He is a psychiatry resident at the University of Maryland/Sheppard Pratt Residence Program in Baltimore.

Despite the benefits, Koransky said, there are limitations and even risks with online therapy. For instance, "if depression is worse than mild to moderate, such as if there are suicidal thoughts," online therapy is definitely not recommended.

Koransky and his colleagues reviewed the results of 14 studies published between 2005 and 2015. Those studies offered varying forms of internet cognitive behaviour therapy (iCBT)

Cognitive behaviour therapy (CBT) is based on the notion that emotional and behavioural disturbance is essentially driven by the way in which we think about that with which we are confronted.

In all of the studies reviewed, people with depression were either given some form of iCBT or were put on a wait-list. The online therapy consisted of online CBT modules, and may also have included phone, email or online forum discussions with a therapist.

Each study had varying numbers of participants, ranging from 45 to nearly 400.

On average, 80% of the participants stayed in the studies until their completion.

Online therapy could fill a gap, Koransky said, as there is a shortage of mental health professionals in the United States, and depression is common.

Koransky added, "One of the studies we found showed that about 14 million people in the US had symptoms consistent with depression in 2014." "It's a great way to access services. This is something people can do at home, really in privacy."

In South Africa depression and suicide are just as much of a problem and according to an expert, there are at least 23 suicides a day in South Africa – which may be underestimated due to the stigma involved in suicide.

While the programmes differed, one example of a programme studied is called MoodGYM, originating from Australia. It consists of five modules, such as an interactive game, anxiety and depression assessments, downloadable relaxation audios, a workbook and feedback assessment, according to the MoodGYM website. This programme is free to use.

One exercise, for instance, is called "what you think is what you feel". It asks users to focus on thoughts when something potentially stressful occurs, such as a job interview that did not go well, and then walks them through thoughts, feelings and how those affect behaviours. For instance, if someone thinks the interview went badly, he or she may feel miserable, which may prompt them to avoid further interviews.

Overall, the programmes studied helped enough so that those with moderate depression to start might end up with mild depression or even no depressive symptoms, Koransky said. "Those effects lasted three to six months," he said.

He called the effect on reducing symptoms at the end of the study "medium" and the effect in maintaining that decrease "large".

One limitation of the new review is that all of the studies were done in Europe or Australia, so Koransky can't say if the findings would apply in the United States (or in South Africa).

That is a limitation, agreed Dr Ranna Parekh, director of diversity and health equity for the American Psychiatric Association (APA). She wasn't involved in the study.

"There is a burgeoning interest in this topic," Parekh said. It may be one way to close the gap in the shortage of mental health providers, she noted.

As for the APA stand on online therapy, "as long as it meets the same standards as someone would provide in an in-person treatment, we would support it," she said.

However, "one of the things patients always worry about with internet-based [programmes] is confidentiality, hacking and all that," Parekh said.

She also cautioned that online therapy is not for those with severe depression. It's only for "someone with mild to moderate depression, but not at risk for suicide".

Lillian Lomofsky, a South African Educational Psychologist says that her reservation about online therapy is that the transference between the therapist and client may not be so effective. An advantage, though, would be that distance is not an obstacle and also that the cost could be lower than the traditional face-to-face.

In therapy? Be realistic

We live in a world where facts and fiction get blurred
In times of uncertainty you need journalism you can trust. For 14 free days, you can have access to a world of in-depth analyses, investigative journalism, top opinions and a range of features. Journalism strengthens democracy. Invest in the future today. Thereafter you will be billed R75 per month. You can cancel anytime and if you cancel within 14 days you won't be billed.
Subscribe to News24
Related Links
Depression is killing us
Medical aids and the high cost of psychiatric meds
Two thirds of depressed teens may benefit from therapy
Next on Health24
Regular cannabis use puts young people at higher risk for self-harm and death, a new study finds