Rock guitarist Leslie West, who rose to fame in the '70s power trio Mountain, has had his lower right leg amputated in a life-saving operation related to his diabetes, his wife said.

West, 65, underwent the emergency surgery after being admitted to a hospital in Biloxi, Mississippi when his leg started to swell and his foot went septic. 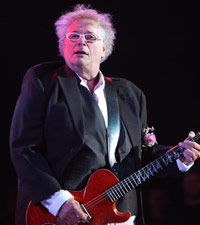 "The doctors tried for two days to save it to no avail. The decision to amputate was one that was necessary to save his life as the infection was spreading throughout his body," his wife, Jenni West, said.

"The nursing staff and doctors have taken excellent care of him and should be called angels for their efforts and tenderness they showed us in this time of crisis."

Uncontrolled blood-glucose levels can cause damage to small blood vessels in the eyes, kidneys and nerves. Damage to larger blood vessels causes poor circulation and can eventually result in a heart attack or stroke. The combination of nerve damage and poor circulation can place the feet and lower legs at risk of amputation.

But the good news is that effective control of your blood-glucose levels can go a long way towards preventing this. West is expected to recover but faces extensive rehabilitation, a spokesman said.

Mountain is probably best known for its debut 1970 single "Mississippi Queen," a staple of classic rock radio. West has long struggled with his weight and type 2 diabetes. He named one of his solo albums "The Great Fatsby".

His next album, "The Unusual Suspects," featuring such guitarists as Billy Gibbons of ZZ Top, Slash of Guns N' Roses and Joe Bonamassa, does not yet have a release date.

"Leslie will, no doubt, bounce back with his unusually bionic blitz of guitarosciousness," Gibbons said in an email. "Leslie will always be playing and standing on higher ground." (Reuters Health, June 2011)