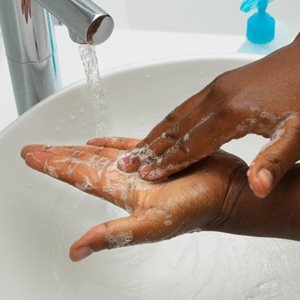 Not washing your hands thoroughly after using the loo could be worse than eating raw meat.

E. coli is the abbreviation for Escherichia coli, a group of bacteria (with multiple strains) – which we've been told is most commonly ingested by eating contaminated food.

That's why we’ve been taking careful measures to avoid this nasty bug by washing our fruits and vegetables, avoiding unpasteurised drinks, and cooking our meat thoroughly. But new research from a consortium (including the University of East Anglia) has found that antibiotic resistant E. coli is more likely to spread through poor toilet hygiene than through contaminated food.

To find out whether the bacterium is picked up via the food chain or passed on from person to person, scientists sequenced the genomes of resistant E. coli from multiple sources across the UK. These included human bloodstream infections; human faeces; human sewage; animal slurry; meat, including beef, pork and chicken; and fruit and salad.

E. coli actually lives in the intestines of healthy humans and animals and, for the most part, is harmless. Some strains can, however, cause serious bodily harm such as food poisoning, urinary tract infections (UTIs) and infections after gut surgery.

The researchers’ report, which can be found in The Lancet Infectious Diseases, reveals that antibiotic-resistant "superbug" strains of E. coli from human blood, faeces and sewage samples were all similar. An analysis of the strains showed that there was little crossover of ESBL (Extended Spectrum Beta-Lactamases)-producing E. coli from animals to humans. (ESBLs are enzymes that can be resistant to antibiotics, including penicillins and cephalosporins.)

Lead author Prof David Livermore, from UEA's Norwich Medical School, said: “E. coli is also the most common cause of blood poisoning, with over 40 000 cases each year in England alone. And around 10% of these cases are caused by highly resistant strains with ESBLs.”

Infections caused by ESBL-E. coli bacteria are difficult to treat, explained Livermore, and added that they are becoming more common in both the community and in hospitals.

ESBL-E. coli – from human to human

Although ESBL-E. coli is widespread in retail chicken meat and food animals, until now the extent of transmission from these sources to humans has been uncertain.

"We wanted to find out how these superbugs are spread – and whether there is a crossover from the food chain to humans," Livermore said.

The team then focused their efforts on collecting and analysing ESBL-E. coli from infected human blood samples from the NHS laboratories, and compared it to those from human faeces, sewage, food, dairy farm slurry and animals across five UK regions.

The results showed that there was little crossover between strains from humans, chickens and cattle, and the majority of strains of ESBL-E. coli causing human infections don't come from eating chicken, or anything else in the food chain.

"Rather – and unpalatably – the likeliest route of transmission for ESBL-E. coli is directly from human to human, with faecal particles from one person reaching the mouth of another,” said Livermore.

It’s still imperative that we continue cooking chicken well and don’t alternately handle raw meat and salad, said Livermore, as there are plenty of important food-poisoning bacteria – including other strains of E. coli, that do go down the food chain.

However, in the case of ESBL-E. coli, we have to bear in mind that it’s absolutely important to wash our hands after going to the toilet.

Here are top five tips to minimise your risk of contracting E. coli:

We live in a world where facts and fiction get blurred
In times of uncertainty you need journalism you can trust. For only R75 per month, you have access to a world of in-depth analyses, investigative journalism, top opinions and a range of features. Journalism strengthens democracy. Invest in the future today.
Subscribe to News24
Related Links
How your kitchen utensils can spread bacteria
Here are the unexpected places where germs live
Hand hygiene – how clean are your hands really?
Next on Health24
Scientists may have figured out main cause of inflammatory bowel disease