Bronchiectasis is a condition of permanent, abnormal dilatation (widening) of the major airways (bronchi) with associated thickening of their walls and tissue destruction. These dilated airways lead to pooling of mucus, with subsequent infection and further tissue destruction (worsening the condition, the so-called “vicious cycle”).

The prevalence of bronchiectasis is unknown and varies considerably among different countries. It is relatively common in South Africa because of the large number of infections occurring in this country. For bronchiectasis to occur, one or more of the following 3 factors are needed:

Other associated conditions include:

The classic symptom is a chronic cough, usually with the daily production of varying amounts of mucopurulent (yellow/green), thick and tenacious sputum. The sputum can sometimes be bad-smelling and be associated with chronic halitosis. There may be associated haemoptysis (coughing up blood) or stabbing chest pains. If the bronchiectasis is extensive and severe, there may also be shortness of breath, wheezing or tight chest, fatigue and weight loss.

The signs (i.e. what the doctor finds on examination of the patient) of bronchiectasis are only usually present if the disease is severe and include abnormal lung sounds like wheezing, crackles or bubbling, pallor and clubbing (enlargement of the fingertips, which can look like drumsticks if very advanced).

Bronchiectasis may be suspected clinically, but should be confirmed and assessed by a few simple tests.

The Chest X-ray may be completely normal but in severe cases may show shadows that are ring-like (if the dilated airways are seen on the end) or tubular (if seen from the side). There may also be scattered opacities if areas of surrounding lung tissue become infected.

The High-resolution CT scan (HRCT) is the definitive investigation. The characteristic features include bronchial thickening and dilatation, lack of airway tapering with ring-like and tubular shadows. The HRCT also delineates which bronchi and areas of the lung are affected and should always be performed if surgical treatment is being contemplated. 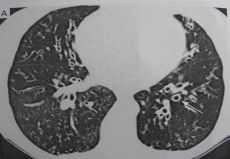 Laboratory tests which are appropriate include:

Other tests may be indicated to establish the cause (e.g. Sweat Test or genetic markers for cystic fibrosis, bronchoscopy of bronchial obstruction, etc). If the disease is severe, it may be necessary to do lung function tests and blood gas analysis (to measure the levels of oxygen and carbon dioxide).

There is no cure for bronchiectasis, but many treatment options can be used to control infections and keep the airways clean.

Antibiotics are used to deal with episodes of acute infection. The courses should be given for at least 10 -14 days, and sometimes higher than usual doses are required. In severe exacerbations the patient should be admitted and given intravenous antibiotics, together with physiotherapy (see below). Several organisms are commonly found in these cases, and may be difficult to eradicate:

These organisms may become resistant to treatment, making future effective treatment very difficult. If the infections are severe and frequent (3 or more per year), long-term cyclical antibiotics should be considered. Some antibiotics (e.g. Tobramycin) are given by the inhalation route (via a nebuliser). Under specialist guidance, selected patients are given low dose macrolide antibiotics (e.g. Azithromycin, Clarythromycin or Erythromycin) three times a week for several months to clear resistant organisms (especially Pseudomonas) and decrease the inflammatory damage to the airways.

Physiotherapy is important to keep the airways free of from mucus and pus, and should preferably be done daily, together with postural drainage. Various devices (e.g. the positive expiratory pressure or PEP valve) can be used to improve the effect. Exercise is also very helpful in mobilising the sputum. If the sputum is very thick and viscous, it can be thinned and made easier to mobilise with nebulised (inhaled) saline, with or without substances like DNAse.

Bronchodilators may be useful in patients with severe extensive disease, especially if lung function tests show obstructed airways with reversibility.

Inhaled and oralcorticosteroids are controversial. They are only indicated if lung function tests show obstructed airways with reversibility, or if there is Aspergillus hypersensitivity. They may suppress immunity, making the patient more susceptible to future infections.

Gastric acid suppression (via proton pump inhibitor or an H2 blocker) should be considered as gastro-oesophageal reflux disease (GORD) may be associated with bronchiectasis.

Surgery has a role in carefully selected patients. It should be considered only if all of the following are present:

Surgery should only remove the affected portions of the lung (as shown on the HRCT), and is combined with aggressive antibiotic and physiotherapy regimes. In extreme cases, a whole lung may be removed. It will never improve the shortness of breath, but it used to stop bleeding, recurrent infections and/or to decrease or eliminate the sputum and halitosis.

Bronchial artery embolisation (blocking off the abnormal bleeding arteries with coils) may be performed for severe haemoptysis if the lung function is too poor for surgery and the source of bleeding can be identified. This is performed by a specialist radiologist in theatre under X-ray guidance.

Lung transplantation may be considered for some patients with very severe generalised disease that is unresponsive to medical therapy.

Patients with bronchiectasis are often ill with recurrent infections, and have a diminished quality of life. Most patients have an accelerated decline in lung function compared to healthy people (not unlike smokers). Complications can include

Few long-term studies have been done, but one found a death rate of 28% due to respiratory complications in 13 years of follow-up.

We live in a world where facts and fiction get blurred
In times of uncertainty you need journalism you can trust. For only R75 per month, you have access to a world of in-depth analyses, investigative journalism, top opinions and a range of features. Journalism strengthens democracy. Invest in the future today.
Subscribe to News24
Next on Health24
Blood test might diagnose chronic fatigue syndrome