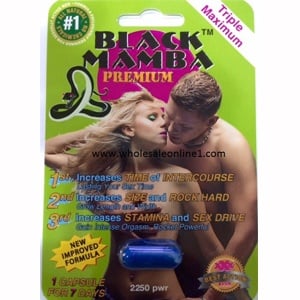 Male sexual enhancement pills are considered to be one of the most counterfeited drugs in the world and according to the latest statistics, South Africans are among the biggest consumers of black market aphrodisiacs.

Over the past 12 months, SARS alone confiscated 207 882 pills at an estimated total value of R21-million. Law enforcement officials also say more and more criminals are sourcing these drugs online and selling them illegally at local pubs and clubs.

Most male enhancement pills are ordered online from websites in India, Malawi, the UK and Hong Kong, and go by explicit names such as Rock Hard, Mojo Nights, Lightning Rod, Black Mamba and Bullet Proof.

Tumi Motsei, spokesperson for Pharma Dynamics says millions of counterfeit PDE-5 inhibitors (the main class of drugs used to treat erectile dysfunction) are seized around the globe each year.

“An IMAP report into the global pharmaceuticals industry estimates the size of the counterfeit drug market at around $200bn, which means that between 8 and 15% of all medicines sold worldwide are fake. In some sub-Saharan African countries the proportion of fakes in the market is closer to 50%.

“Counterfeit sexual enhancement drugs are heavily marketed online and because so many of the websites fall outside SA’s borders, it makes it incredibly difficult to regulate,” says Motsei.

With so many side-effects associated with taking fake erection drugs, why do so many South Africans continue to buy these drugs illegally over the internet?

“The problem is two-fold,” says Motsei, “firstly, people are offered erectile dysfunction (ED) drugs at a fraction of the price that they sell them for at licensed pharmacies and secondly, it’s a condition which men are often too embarrassed to discuss with their doctor. Counterfeit drug manufacturers take advantage of this vulnerability by making their products available without prescription. This then allows men to access prescription medication without seeking appropriate medical advice.

“There are literally hundreds of online websites where sexual enhancement pills can be bought for as little as R9 a tablet. Currently the cheapest legal version in SA goes for around R50 a pill.

“It’s not just older men that suffer from erectile dysfunction that’s keeping the black market virile, but those in their early 20s too, who buy primarily for recreational purposes.”

Motsei warns that ED drugs should never be taken unless it is recommended by a doctor. In combination with nitrates used to treat cardiovascular conditions, it can prove fatal.

“Even when the active ingredient dose is the same, one also needs to consider where the drug has been stored, whether it has expired or if the manufacturer used active ingredients from different sources, which all affects the way the drug is absorbed by the body. Counterfeit ED drugs have also been shown to contain potentially dangerous substances, including acid, commercial paint, blue printer ink and even brick dust.”

There are regular news reports of patients being hospitalised with severe hypoglycaemia, caused by a sudden drop in blood sugar. Many die and other suffer irreparable brain damage after taking fake erection pills.

“Most men experience erectile dysfunction at some point in their lives, usually between the age of 40 and 50. The condition can have a range of causes, both physical and psychological. It is exactly because erectile dysfunction is so common, that it’s important to pin-point what specifically is causing it in you. Medical conditions such as diabetes, heart disease, high blood pressure and hormonal problems could also result in ED.

“Instead of scouring the Internet for these drugs, rather talk to your doctor about your sexual problem. To a doctor, ED is a legitimate health concern, which affects a large proportion of men – 5 in 10 to be exact.

Abstain from buying drugs online completely as you won’t know if they're legitimate. Should you be offered drugs of whatsoever nature by a friend, stranger or colleague, report it immediately to the SAPS Crime Stop hotline: 08600 10111,” advises Motsei.

Penis transplant: what the real focus should be on

We live in a world where facts and fiction get blurred
In times of uncertainty you need journalism you can trust. For 14 free days, you can have access to a world of in-depth analyses, investigative journalism, top opinions and a range of features. Journalism strengthens democracy. Invest in the future today. Thereafter you will be billed R75 per month. You can cancel anytime and if you cancel within 14 days you won't be billed.
Subscribe to News24
Next on Health24
Victoria's Secret angels follow low-carb high-fat diets to get runway ready