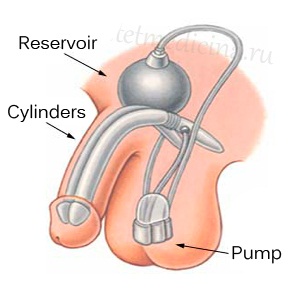 Erectile dysfunction can result from a wide range of causes, both physical and psychological, and often involves several interlinked causes. This can make treating the underlying reasons behind the problem difficult.

As a result, most treatment options aim to bypass these underlying causes and treat the condition symptomatically by giving the patient control over their erection. The most common solution to this is drug-based therapy, such as Viagra.

However some patients do not find such medications effective, or are medically unsuitable to receive it. Men who have blood vessel problems, for instance, are usually contra-indicated from receiving such drugs.

Read: The causes of ED

Implants are either inflatable or semi-rigid. Inflatable implants involve two or three chambers being inserted into the shaft of the penis. A reservoir of salt water is also inserted into the belly or around the penis area which can be used to pump water into the chambers, thus making the penis rigid. This liquid can then be returned to the reservoir after sex.

Semi-rigid implants are not inflatable, and thus the patient maintains a constantly firm penis. The implants may be maneuvered by hand to make the penis straight and firm for sex, and then bent into a more comfortable position the rest of the time. Because of the constantly "erect penis" these implants are not ideal for men with very large penises.

Penile implants provide a long-term, non-pharmacological solution, though they do require serious surgery to implement. The procedure is usually done under general anaesthetic and patients may have to stay in hospital for up to two days and then follow a two-week course of antibiotics. Sex should be avoided for at least a month after the procedure, and men should be wary of tight clothing around the groin for up to 6 weeks.

In general, penile implants are received well by patients with a high satisfaction rate for both kinds of implant. While the erections produced by the devices are not the same as those that occur naturally, they still allow for a relatively normal sexual experience.

Read more:
Cellphone exposure may harm sperm
Are you at risk for ED?
How ED affects the mind