How your eyes deceive you

Who hasn’t, as a child, sat for hours making trees dance by alternatively closing an eye? Some people retain that fascination with magical visuals, and the Best Visual Illusion of the Year Contest brings them together with results that might change the way you look at the world.

The competition is a fantastic coming together of science and art, and makes learning about optical illusions fun.

Visual illusions are those perceptual experiences that do not match the physical reality. Understanding visual illusions is an important part of the process of curing certain diseases of the visual system.

Therefore – and here’s a fabulous job! – there are visual scientists dedicated to discovering the neural underpinnings of visual illusionary perception.

Here's an entry from previous Best Visual Illusion winners Rob van Lier and Mark Vergeer (the Netherlands), who portrayed an illusion that shows that the colour viewed induces an aftermath of diluted colour on a surface that is actually white.

This is a well-known phenomenon, but what  they showed is that 'a coloured image can produce different coloured after-images at the same retinal location”'(Lier & Vergeer).

See below and try it out:

Fix your gaze on the centre of one of the figures, and stare at it for some time (20-30 seconds) while it cycles (without moving your eyes).

After several iterations you'll start noticing that the empty outlines fill in with ghostly reddish or bluish colours. These are called "after-images".

'The phenomenon is likely to be caused by a spreading of the after-image of those elements between the physical contours of the outline shape,' they say.

'For example, when a circle is positioned in the centre of the outline shape, no after-image is perceived within the circle.

'In conclusion the observations are due to a rapid spreading of local patch-based after-images within the outlines presented after the image.'

“Ghostly Gaze” by Rob Jenkins: a “you- think-she’s-looking-at-you-but-it's-all-an-illusion”, illusion: Ghostly Gaze (will open in a new window). 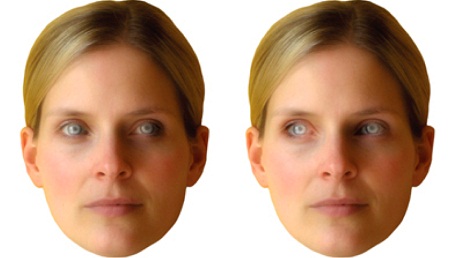 Move the slider and watch how both women turn their eyes to you.

We normally try to figure out the direction of someone's gaze by perceiving where the dark parts of their eyes are looking. Jenkins shows that details such as the outline of the iris can override larger patches of darkness.

We take many social cues from a gaze direction, and Jenkins’ Ghostly Gaze illusion shows “gaze estimation is not always dominated by gross luminance distribution across the eye”. So make sure she really gave you the cue and looked at you before you act, guys!

Thomas Papathomas from the US added an additional illusion onto the well-known hollow mask illusion.

Have you ever had a mask hanging up and been sure that its gaze follows you as you walk past it? In addition, when the hollow mask is made to rotate, it appears to turn opposite to the actual direction it is in fact rotating.

Now if we add an object such as a nose ring, it is not assigned the illusionary depth that the mask has. This in effect creates a motion illusion as the object appears to rotate in the opposite direction to that of the mask.

Contours of skyscrapers sometimes appear to bulge against a cloudy sky. Most illusory distortions of parallel lines disappear if contours are jagged.

However, in Bettella, Casco & Roncatos’ illusion, the illusion is still present, irrespective of the jagged contours, because, “the visual system relies on local luminance contrast to code local tilts and positions along the contour bordered by a thin outline”.

Check it out: Building & Clouds (link will open in a new window)

Here’s one for artists. Dejan Todorovic, who won third prize in 2005, displays an impossible object with a shaded arch. Our vision interprets shading differently, according to the shape of the contours.

In this image, two different contours are shaded with the same pattern, but convey two different reliefs. This reveals how the optical system reacts when faced with ambiguous input:

Take a look at the Shaded Arch 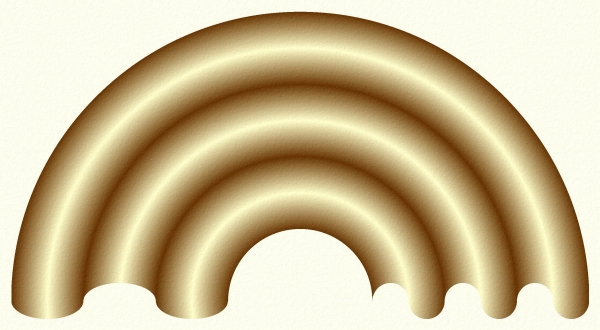 Michael Pickard’s illusion, the Pinball Wizard, causes a sense of optical rotation. The interesting thing about this popular illusion is that it breaks the ‘rules’.

Whilst the classic Rubin-vase illusion demonstrates how we automatically segregate foreground and background in an image, the Pinball Wizard shows a single image acting simultaneously as both images.

This gives rise to an illusory sense of rotation. Using visual cues to create an impression of depth and carefully chosen colour values, a static screen is combined with an animation of horizontally traversing spheres.

The screen appears simultaneously as a background and as foreground surface on the spheres - inducing a sense of rotation as the spheres move.

Try these mind games, including the optical illusion, the checkershadow Visit our Eye Health centre

We live in a world where facts and fiction get blurred
In times of uncertainty you need journalism you can trust. For only R75 per month, you have access to a world of in-depth analyses, investigative journalism, top opinions and a range of features. Journalism strengthens democracy. Invest in the future today.
Subscribe to News24
Next on Health24
The sun can blind children