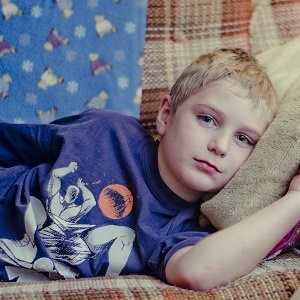 Flu symptoms start about 48 hours after exposure to the virus, although this period may vary from one to four days. You typically have continuous fever for about three days, although other symptoms such as cough, lethargy and a general feeling of malaise may persist for longer.

You’re considered “infectious” when the virus is shed from your airways. This can occur from the day of infection and can continue for eight days – even longer in people with decreased immunity. Most people have an uneventful recovery after treatment for symptoms only.

Symptoms can occur abruptly, and it’s sometimes possible to pinpoint the exact hour of the day that symptoms began. Children often vomit and have diarrhoea, but these symptoms are infrequent in adults. In addition, flu complications may occur.

Complications
Both children and adults can develop serious complications when they have flu. These include:

Primary influenza virus pneumonia
This form of pneumonia occurs when the flu virus has caused severe lung damage. You’ll start with the usual symptoms of flu, but the fever will persist, your cough will worsen and you’ll become extremely short of breath. In severe cases, you may have a bluish tinge and become confused due to a lack of oxygen.

This form of pneumonia is very serious and will require intensive respiratory support in a hospital. Most people who develop primary viral pneumonia have underlying heart and lung disease and should therefore have a yearly flu vaccination.

Secondary bacterial pneumonia
This is more common than viral pneumonia and occurs when bacteria cause a secondary infection in the lungs. Typical symptoms include recurrence of fever, shortness of breath and productive cough (when secretions come up during coughing) four to 14 days after the symptoms have almost disappeared.

This complication is most often caused by bacteria called Streptococcus pneumonia, Staphylococcus aureus and Haemophilus influenzae type B.

Some doctors recommend that people in high-risk groups be vaccinated against pneumococcal pneumonia as well as influenza.

Otitis media and croup (in children)
As every mother knows, young children are prone to middle ear infections (otitis media) whenever they have an upper respiratory tract infection. In the majority of cases the ear infection is caused by the virus itself and isn’t a secondary bacterial infection, so antibiotics are seldom necessary

Children may also develop croup (a viral infection of the vocal cords and large main airways) as a result of flu and other respiratory-tract virus infections.

Myositis and myocarditis
In rare cases, inflammation of the muscles of the body (myositis) can occur. It’s more common in children and painful tender leg muscles are a symptom.

Also very rarely, the heart muscle may become inflamed (myocarditis). Symptoms include tiredness, shortness of breath, heart palpitations, a rapid pulse and discomfort in the chest.

Because myositis and myocarditis are more likely if the muscles are put under stress, it’s not a good idea to exercise while you have the flu (or any other viral illness).

Complications of the nervous system and brain
Young children with flu may have fever fits (called febrile convulsions), as is possible in any illness involving a high temperature.

Reye’s syndrome is a very serious condition affecting the brain and liver. Symptoms may include vomiting, lethargy, altered consciousness, seizures and respiratory arrest. The majority of children will recover from Reye’s syndrome, but in some cases permanent brain damage and death might follow.

Other central nervous system complications that have been associated with influenza virus infection include Guillain-Barré syndrome, encephalitis and transverse myelitis, but these are very rare.

Read more:
- How is the flu treated?

- Symptoms of the flu