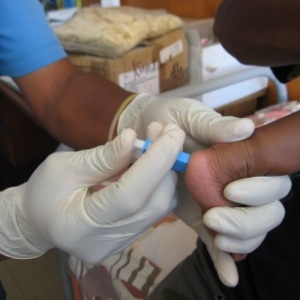 A healthcare worker testing a baby for HIV
WikiCommons

The World Health Organisation’s recently released Consolidated Guidelines for HIV Testing Services focuses on making sure that people who get HIV Testing Services (HTS) also benefit from what the WHO calls the 5 Cs – principles that must be applied whenever and wherever this kind of testing is done:

Consent: Before they have HTS, people must be given all the information they need so that they can agree to be tested and counselled – what is called ‘informed consent’. They must also be clearly told that it is their right to say No to testing and counselling. (The consent doesn’t have to be in writing, it can be spoken.)

Confidentiality: Those offering HTS will not tell anyone else what’s been discussed or revealed during HTS, unless the person being tested clearly says it may be disclosed.

To reduce stigma and shame, counsellors should encourage the person being tested to tell others, like partners and family members and people whom the person trusts – it’s often helpful to have other people you can talk to openly.

Counselling: It’s fine to give some basic information about the test and the process to groups of people, but everyone should also have a chance to ask questions privately, if they want to.

After the test is done and the result is known, the people doing the testing must talk the person through his or her result. Whatever the outcome is, the counsel given must be thorough, thoughtful and appropriate.

Staff offering the service must be supervised by helpful and supportive people who guide them in their jobs and make sure that the counselling is of high quality. There must be checks in place to ensure standards remain high (quality assurance mechanisms as they’re known).

Correct: It is, of course, important that results should be as accurate as possible and that the diagnoses given are correct. Tests should be of the best quality, and subject to quality assurance mechanisms. The service should be supported by a national reference laboratory (a laboratory that set standards and does the more complicated or unusual tests not done in clinics and hospitals, and therefore has very highly trained staff and advanced equipment).

Anybody who gets a positive HIV diagnosis should be retested to make sure the diagnosis is right before they’re started on HIV care or treatment.

Connection: Every testing service should be linked with services that offer treatment and care, as well as prevention services. Knowing your status is not helpful if you can’t do anything about it. Such services should provide both short-term prevention and treatment services, for the here and now, and long-term, so that care is kept going.

Read: Why you should get tested for HIV/Aids

The guidelines bring together advice which is familiar to people in the field, as it has been issued over the years, based on scientific evidence and field surveys; but there are two new guidelines.

The first of the new guidelines is very relevant to us in South Africa:

“Lay providers who are trained and supervised can independently conduct safe and effective HIV testing using RDTs.” Lay providers are people who do not have diplomas, degrees, or other qualifications in a field of medicine.

Previously, they weren’t able to test for HIV, but now, due to the development of Rapid Diagnostic Tests (RDTs), they can. RDTs are easy to do and provide immediate results; this means that, instead of an extensive pre-test counselling session, the person can be given brief information about the test, and give informed consent, then get their results and be counselled immediately on either prevention (if they’re negative and don’t have HIV), or on coping with a positive diagnosis – and they can be started on treatment straight away if necessary.

The second new guideline relates to testing large groups of people for surveillance – that is, collecting data to figure out how common infection is in a country, whether it’s going up or down, and the like.

This is high-level advice aimed at policy-makers and implementers. Basically, the recommendations are that the strategies and processes used should be suitable for HIV diagnosis; that researchers should use information gathered from programmes that are part of normal health practice (especially from Prevention of Mother to Child Transmission programmes, which are well used and so give good info); that people who are tested for surveillance reasons should not be left ignorant, but should also be given their diagnoses, positive or negative; and it lays down some conditions for doing ‘incidence assays’ (broad testing to see what percentage of a population has HIV, for example).

Much of the other, existing guidelines which are summarised here are about applying the 5Cs in practice.

- Countries and societies should ensure the protection of people’s privacy, and both policy, law and society’s norms should work to prevent discrimination and promote acceptance and tolerance towards people who are living with HIV.

- When do people need to be retested for HIV? Retesting once a year should be offered to people from key populations – that is, people who are at greater risk of infection because of certain factors, such as sex work, being in prison, or using injected drugs. The HIV-negative partners of people living with HIV should also be retested annually. Pregnant women who are negative should be retested when their pregnancy is in the sixth to ninth month.

- It used to be thought that people should be retested after a few weeks (the so-called ‘window period’ when infection might show up) but this is no longer necessary.

- People who’ve just been diagnosed positive, or who were not put on treatment immediately when they tested positive should be retested before treatment with antiretrovirals is begun – but NOT while they are taking the drugs, as there’s a big risk of an incorrect diagnosis.

Testing and counselling can now be offered by lay people – which will expand services a lot – or by health-care facilities, so-called Provider Initiated Testing and Counselling (PITC). This is testing and counselling which is offered to a person visiting a health care facility – a hospital, clinic, or even a group of doctors – whenever they visit, and no matter what the reason for their visit, even if it’s something as simple as the flu.

- In a situation like South Africa’s, where the epidemic has become generalised (that is, you’ll find people in all groups and levels of society who are infected – it’s not limited to special groups, as it is in some countries), PITC should be offered to all clients at all services, including for example ante-natal clinics, services for sexually transmitted infections, and tuberculosis (TB).

- In TB clinics, people with TB who’ve tested positive for HIV should be encouraged to tell their partners (disclose their status). The partners should also be offered the chance to test for HIV, and be counselled.

- The WHO recommends the establishment of HIV testing services within the community (community-based), ones that, like health-care facilities, are linked to prevention, treatment and care services.

Babies, children and adolescents are a top priority in these guidelines.

- A baby who has been exposed to HIV (because the mother is HIV, usually) should be tested for the presence of the virus four to six weeks after birth (called a virological assay), so they can get started on treatment quickly if they test positive. If the result is not definite, then they should be tested at nine months for antibodies to the virus; if these come up positive, then another virological assay should be done to make sure the diagnosis is correct.

- If you don’t know whether a child under 18 months of age has been exposed to the virus, they should be tested.

- It’s strongly recommended that school-going children (aged 6 to 12) should be told about their status, if they are positive; they should also be told about the status of their parents or caregiver.

- HIV testing services, with linkages to prevention, treatment and care, should be offered to older children (adolescents) at all health-care facilities, and if they have HIV they should be counselled about the possible pros and cons of disclosing their HIV status.

- PITC for women should just be a routine part of the package at antenatal, childbirth, postnatal and paediatric (child health) facilities. Breastfeeding mothers who are HIV-negative should be retested regularly while they are still breastfeeding their child.

- Anywhere in the health-care system that HTC is offered, it should also be on offer for partners if they want it. Counsellors should encourage partners to share their status with each other.  And ways should be sought to bring HTC to more men.

- HTC, linked to prevention and treatment, should be routinely offered to all key populations (who have greater risk of infection) both in the community, and in places like prison and health-care facilities.

There are different guidelines for situations where there’s a low prevalence of HIV in the population, but they don’t apply to South Africa and our neighbours.

- A diagnosis of HIV-positive should be only be given to people who have had two positive tests, one after the other. If they have a positive test, followed by a negative test and then another positive (A1+; A2−; A3+), then their status called ‘HIV-inconclusive’, and they should be asked to come back in 14 days for retesting.

- If their first test is positive, followed by two negatives (A1+, then A2−, then A3−), the final result should be considered HIV-negative.

We live in a world where facts and fiction get blurred
In times of uncertainty you need journalism you can trust. For only R75 per month, you have access to a world of in-depth analyses, investigative journalism, top opinions and a range of features. Journalism strengthens democracy. Invest in the future today.
Subscribe to News24
Next on Health24
5 myths about HIV/Aids