Zuma's Aids shower comment comes back to haunt him 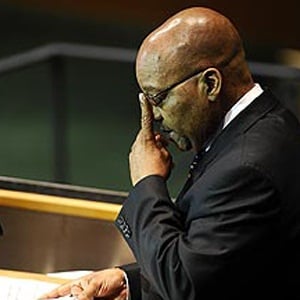 The EFF has breathed new life into President Jacob Zuma's controversial comment that he took a shower to stop himself from getting Aids, after knowingly having unprotected sex with an HIV positive woman.

This emerged in 2006 when Zuma was cross-examined after being charged with raping an HIV-positive woman.

However, on Wednesday this statement got an unwelcome afterlife in an answer and question session with Deputy President Cyril Ramaphosa in the National Council of Provinces (NCOP).

Did Zuma get a drubbing down?

The EFF's Nkagisang Poppy Mokgosi wanted to know what the Zuma-led government was doing to dispel misleading notions of HIV and Aids such as "the dangerous view that sleeping with virgins cures HIV or that one made popular by Mr Zuma that after having sex with an HIV positive person you take a shower".

Zuma told a court during a rape trial that he had showered rather than worn a condom to ward off the risk of HIV after he had unprotected sex with an HIV positive woman.

"Have you as government scolded Mr Zuma for those dangerous comments that have the capacity to mislead the nation," Mokgosi asked.

Ramaphosa did not answer the question and instead outlined the successes of the South African National Aids Council (SANAC) that Zuma once headed when he was the deputy president of South Africa.

"The issue of HIV is being driven in our country, indeed by the department of health; but actively implemented by the South African National Aids Council.

"SANAC has achieved great success since 2009 when we turned the whole issue of Aids around and began to distribute antiretrovirals, but also saved many lives," he said.

The Aids message is clear

Perhaps taking an unveiled swipe at Zuma and Mbeki, Ramaphosa noted that one message from the government has been very clear.

Mokgosi, who was earlier told to refer to the president as his excellence, was not happy with Ramaphosa's response and rose on a point of order.

"Maybe the deputy president did not understand my question. Maybe I need to repeat it because my question was 'have you as a government scolded Mr Zuma for those dangerous comments'"?

Putting a quick end to her concern, NCOP chairperson Thandi Modise dismissed it saying it was not a point of order.

Mbeki defends his stance on Aids

The NCOP briefing came in the wake of Mbeki's controversial remarks on Aids in his letter titled A brief commentary on the question of HIV and Aids, which forms part of a series of letters attempting to reframe his presidency.

Mbeki sought to defend his stance that a virus cannot cause a syndrome, which again caused dismay among medical professionals and Aids activists.

During his time in office, Mbeki's government was compelled by the Constitutional Court to make antiretroviral treatment available to HIV-positive pregnant women.

Two independent studies have estimated that delays in making ARVs available in the public sector resulted in more than 300 000 avoidable deaths. It also resulted in an estimated 35 000 babies being born with HIV who would not otherwise have been HIV-positive.

An open letter to Thabo Mbeki by a clinical associate