How a foreskin ups HIV risk 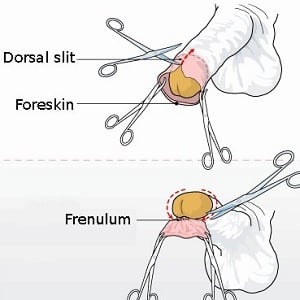 Circumcision, which has been subject of fierce debate, involves cutting the foreskin around the tip of the penis.

The overall risk of adverse events associated with male circumcision is low, with minor bleeding and inflammation cited as the most common complication

One of the most effective weapons against HIV/Aids is in fact 4 300 years old. Circumcision has become a hot topic in the field of HIV prevention. The results of three recent studies on male circumcision provide strong evidence that this simple surgery could save millions of lives.

Robert Bailey, Professor of Epidemiology at the University of Ilinois at Chicago, speaking at the 2007 International Aids Society Conference on HIV Pathogenises, Treatment and Prevention, said that male circumcision has been likened to a vaccine.

"Not a perfect vaccine, but an effective one - about 60% effective in preventing new HIV infections in adult heterosexual men," said Bailey.

Oldest surgery in the world

Bailey pointed out that circumcision is hardly a new health-related intervention: the ancient Egyptians performed the procedure over 4 300 years ago, and it developed independently in several different cultures around the world.

It is likely the oldest and most common surgery ever performed.

Today, about 30 - 35% of men are circumcised. When performed under antiseptic conditions by a trained practitioner, said Bailey, it is a simple, low-risk procedure.

Trials stopped because so effective

The most persuasive evidence to date of circumcision's efficacy in reducing HIV infection has come from three randomised controlled trials conducted in South Africa, Uganda and Kenya.

The trials were all stopped before going to full completion. Bailey explained: "This was because the protective effect of circumcision was so strong there was miniscule statistical doubt it was effective, and it wouldn't have been ethical to continue to withhold the procedure from uncircumcised men in the trials."

The trials showed a reduction of HIV incidence in circumcised men of 57%. "One would be challenged to find any public health intervention with such a strong and consistent efficacy. Certainly, we have nothing else like this in the field of HIV prevention," said Bailey.

In the light of the trial results, the World Health Organization (WHO) and the United Nations Programme on HIV/Aids (UNAIDS) issued a joint statement in which they strongly endorse male circumcision as a means of HIV prevention, asserting that its efficacy "has been proven beyond reasonable doubt" and that it "should be considered as part of a comprehensive HIV prevention package."

In addition to HIV, circumcision offers protection against several other conditions, said Bailey, including urinary tract infections in baby boys, and penile cancer, chancroid and human papillomavirus in adult men.

Bailey lamented the fact that, even as early as 2000-2001, there was already ample evidence - admittedly from less rigorous studies - that an uncircumcised man was far more likely to be HIV-infected than a circumcised man.

"We've come to the same conclusion that was staring us in the face then," said Bailey. "Six years, 23 million dollars and probably a million new preventable infections later.

"Only a handful of scientists, and no policy makers, were persuaded that circumcision should be considered as a new HIV prevention strategy. Randomised control trials had to be done before the international health community could be persuaded to move.

"It raises the question: have we raised the bar too high for converting evidence to action in the face of a crippling pandemic?

"One can't help but contemplate that if it were a drug or a compound or a shot with a fancy label, international agencies and donors would have been fighting to make it available many months, even years ago.

"But no one stands to profit from male circumcision - except the 4 000 men in Africa who will be newly infected tomorrow, and their partners and children."

Concerns have been raised that if circumcision were promoted as preventing HIV, circumcised men may feel protected and take more risks, a phenomenon known as "sexual disinhibition". As an example of this, Bailey quoted one circumcised man as saying: "Ah, I have a natural condom."

Watch: The pros and cons of male circumcision. Source Youtube

However, Bailey reported that data from the three trials suggest that sexual disinhibition did not occur. The level of risk behaviour of both circumcised and uncircumcised men came out about equal; overall risk behaviour and sexually transmitted diseases (STIs) declined for all participants in the trial.

He added that, in addition to its high efficacy, circumcision is also cost effective - more so the faster countries act. "The faster we scale up, the more infections we can prevent - and each infection averted costs us less."

Will men agree to get circumcised?

Bailey believes that, if the large numbers of people who came to participate in the trials are anything to go by, then men are highly likely to find circumcision initiatives acceptable.

A circumcision programme should also engage women in its planning, because they, as sex partners and mothers, will be instrumental in encouraging male circumcision. In previous studies on circumcision acceptability, women particularly were in favour of their sons getting circumcised, and felt that circumcised men were cleaner and less likely to be carrying an STI.

Why a foreskin increases risk

The outer surface of the foreskin and the penile shaft are covered by a relatively thick layer, which provides a protective barrier against HIV.

By contrast, the inner mucosal layer of the foreskin is very thin, and allows HIV and other pathogens easy access to target cells lying near the surface.

During heterosexual intercourse, in an uncircumcised man the foreskin is pulled back down the shaft of the penis, and the whole inner surface of the foreskin is exposed to vaginal secretions, providing a large area where HIV transmission could take place.

Additional information source for this article:

We live in a world where facts and fiction get blurred
In times of uncertainty you need journalism you can trust. For only R75 per month, you have access to a world of in-depth analyses, investigative journalism, top opinions and a range of features. Journalism strengthens democracy. Invest in the future today.
Subscribe to News24
Next on Health24
South Africa licenses anti-retrovirals to prevent HIV