No jail time for HIV singer

A German girl band singer broke down in tears as a court found her guilty of causing bodily harm to her ex-boyfriend by having unprotected sex with him despite knowing she was infected with HIV. She was not sentenced to jail time.

Nadja Benaissa, a member of No Angels, was given a two-year suspended prison sentence and 300 hours community service after she was convicted in a Darmstadt administrative court. She faced a possible 10 years behind bars. 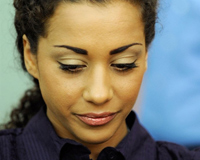 The court ruled that the 28-year-old had infected a former boyfriend with the virus that causes Aids by having unprotected sex with him.

Admitting it was a big mistake

Benaissa helped her case during the trial, which began August 16, 2010 by acknowledging she had unprotected sex despite knowing she was HIV-positive and saying it was a big mistake.

"I'm sorry from the bottom of my heart," Benaissa said, adding that she had realised how much her ex-boyfriend was still suffering.

"I wish I could turn back time and make everything undone," she told the court. "But I know that he will never forgive me." Prosecutor Peter Liesenfeld said he thought the sentence was appropriate.

"We have to remember that she was a lot younger than she is now, she had a turbulent life, and the acts were committed a long time ago," he told Associated Press Television News. "I think a suspended sentence is justified."

Deserved to be punished

Benaissa left the courtroom without making any comment but her attorney Oliver Wallasch noted that she had said during the trial that she thought she deserved to be punished for her actions.

"We managed to avoid a jail sentence for my client and with the conditions of the sentence she received, including some community service which she said was justified during the trial, the sentence was satisfactory for the defence and my client," he said.

The man who claimed Benaissa infected him said they had a three-month relationship at the beginning of 2004, and that he got tested after Benaissa's aunt asked him in 2007 whether he was aware that the singer was HIV-positive.

Benaissa said she didn't tell anybody about her disease because she was afraid of the consequences - which she described during the trial as a "cowardly act." During the trial, microbiologist Josef Eberle, who examined the viruses of both Benaissa and her ex-boyfriend, told the court "in all probability" the singer was responsible for infecting the 34-year-old man with the virus that causes Aids.

Both were suffering from a very rare type of the virus that was first found in western Africa, he said.

Benaissa told the court she became addicted to crack cocaine at 14 and that during her pregnancy at 16, she found out that she was HIV positive.

After winning a TV talent show, "Popstars," in 2000, she joined No Angels with four other young women and hid her illness from everyone. No Angels sold more than 5 million albums before breaking up in 2003.

Along with three other members from the original band, Benaissa helped re-form the group in 2007. They performed to a disastrous response in the 2008 Eurovision song contest, coming in 23rd out of 25 contestants.

No Angels were heading into a concert in Frankfurt in April 2009, when Benaissa was taken into custody and kept for 10 days - a move that a German Aids awareness group criticised as disproportionate.

The Deutsche Aids-Hilfe group argued her partners also carried a share of the responsibility for becoming infected, and criticised the verdict.

"If the responsibility for prevention is put entirely upon women and HIV-positive people, we are not recognising the combined responsibility of two people," said spokeswoman Marianne Rademacher. (Sapa, Christoph Noelting, August 2010)