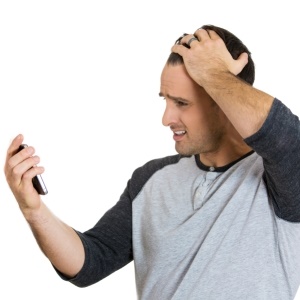 Man losing his hair - i Stock

For men, probably the scariest thing about getting older is hair loss.

Women also lose some of their hair as they grow older, but this is not as pronounced as in men, mainly because women have much less of the "male" hormones testosterone and dihydrotestosterone (DHT).

Male pattern baldness (androgenetic alopecia) is by far the greatest cause of hair loss in men. Hair loss can start as early as adolescence, and more than half of all men have lost some hair by the age of 50.

The culprit that shrinks hair follicles and causes them to die is dihydrotestosterone, a male hormone that is derived from testosterone. (It is well known that castrated men who don’t produce male hormones don’t go bald.)

Chemotherapy can cause hair loss, but this is usually a temporary condition, and the hair grows back once the course of treatment is over.

There is also a genetic component to baldness and men with close relatives who have male pattern baldness are more likely to develop the condition.

To summarise, the three main causes of male baldness are age, male hormones and genetics.

Cause of great distress

People resort to all kinds of ways to hide the fact that they are losing their hair. Some men shave their heads to divert attention from the balding spots while others resort to the dreaded comb-over. More drastic actions involve hair transplants or wearing a wig or toupee.

All of the above measures are “band-aids” that don’t address the root (as it were) of the problem. The best and most effective way to solve the problem is, of course, to restore natural hair growth.

A lack of certain nutrients may contribute to hair loss, and supplements like vitamin C and E, vitamin B complex, inositol and copper may encourage hair growth. Remedies like rubbing an onion on the bald spot and massaging the scalp with coconut milk also don’t seem too unusual or outlandish.

There are currently a number of “caffeine shampoos” on the market that promise to restore hair growth and/or slow down hair loss by stimulating the individual hair roots. It is also claimed that the caffeine suppresses testosterone and the stress hormone CRH.

Saw palmetto is an ingredient in some hair loss treatment shampoos and may slow hair loss by blocking the amount of DHT in the scalp.

But the following 'boererate' are just too weird:

We live in a world where facts and fiction get blurred
In times of uncertainty you need journalism you can trust. For only R75 per month, you have access to a world of in-depth analyses, investigative journalism, top opinions and a range of features. Journalism strengthens democracy. Invest in the future today.
Subscribe to News24
Next on Health24
Trichotillomania - the hidden shame