SEE: How to help your child cope with IBS Help your little one to cope with IBS (iStock)

The crippling abdominal cramps and other symptoms associated with IBS (irritable bowel syndrome) are hard for adults to cope with. It can be even worse for a small child to understand and handle these symptoms at school, during extramural activities or when visiting friends.

Is IBS common in children?

On a global basis, the IBS prevalence rate is between 10% and 15%, but in South Africa it's a little lower and is estimated to occur in about 8% of the population. Research on the prevalence of IBS specifically in children and teenagers is still fairly limited in South Africa.

The fact that there are no specific tests for the diagnosis of IBS, in addition to the various overlapping symptoms used in the diagnosis classification, makes it even more difficult to pinpoint IBS in children.

How do I know if my child has IBS?

As in adults, children will display recurring abdominal cramps, a change in bowel movements, abnormal stool movements and a flare-up of symptoms when eating certain foods. Look out for the following:

Some symptoms common in adults with IBS that usually occur after eating can also present in children. Bridget Surtees, a registered dietitian from Cape Town, says that any unusual activity in your child's bowel movement should definitely be checked out by a doctor. In order for the child to be diagnosed with IBS, the following symptoms need to be present for at least three days a month for a period of three months or longer:

What causes IBS in children?

The causes of IBS remain a mystery to researchers worldwide. In the past, it was thought that IBS was caused only by psychological factors such as stress, but since then other theories such as decreased serotonin production, genetics, inflammation and an abnormal growth of bacteria in the gut have been presented to explain IBS.

The possible causes of IBS in adults are thought to be similar in children, and studies have shown that IBS is more common in children with family members who have a history of IBS. IBS has also been linked to mental health problems, problems between the brain and nerves in the intestines, as well as hypersensitivity.

What should I do if I suspect that my child has IBS?

Monitor your child’s bowel movements especially after they have eaten. If problems occur twice a week for a duration of minimum two months and your child is still growing normally, it is possible that they could be suffering from IBS.

A physical examination by your GP is advisable, where questions will be asked regarding your child’s medical history and regular diet. Additional tests might be necessary to rule out other conditions. Surtees also suggests making gradual changes to a child's diet, ensuring they get enough fibre, and eliminating the foods that cause a flare-up of symptoms. 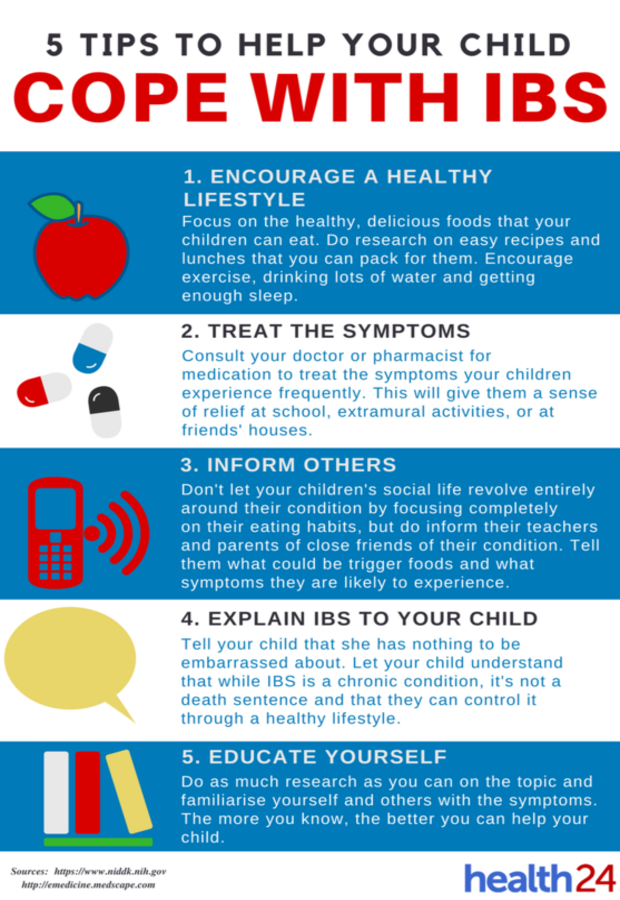 We live in a world where facts and fiction get blurred
In times of uncertainty you need journalism you can trust. For only R75 per month, you have access to a world of in-depth analyses, investigative journalism, top opinions and a range of features. Journalism strengthens democracy. Invest in the future today.
Subscribe to News24
Related Links
Only 20% of IBS sufferers seek medical help
The role of stress in IBS
Do you have IBS?
Next on Health24
10 dietician-approved lifestyle changes that'll curb those uncomfortable IBS symptoms