South African returns from the US for life-saving surgery 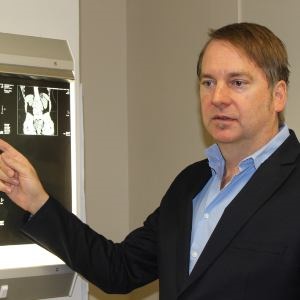 A 57-year-old United States citizen recently returned to South Africa, his birth country, after more than 35 years to undergo a record-breaking and life-saving operation to remove a massive kidney tumour, which American doctors had refused to operate on.

Interviewed after the recent two-and-a-half hour operation to remove the tumour, a tired but relieved Dr Marius Conradie, a urologist who practises at Netcare Waterfall City Hospital in Midrand, confirmed that, at 3.2kg, this was the largest kidney tumour that was removed in a laparoscopic surgical procedure in the history of international medicine.

“The patient’s original CT scans did not reveal the true size of the tumour and we were astonished when we were able to clearly visualise the growth in three dimensions and see just how large it really was,” noted Dr Conradie.

“You may get some idea of its true size and weight of the tumour when you consider that the average kidney itself usually weighs in at only approximately 300g. This growth was a solid mass of over 3kg with a diameter of 30cm when we removed it. We had never seen anything like it.”

Earlier this year, doctors at the All India Institute of Medical Sciences (AIIMS) reportedly removed a kidney tumour weighing 5.018kg from a patient, the largest tumour of this type on record.

Read: When tumours contain, hair, teeth and other body organs

However, this was not a laparoscopic operation, a type of procedure which enables a surgeon to access the inside of the pelvis and abdomen through small incisions made in the skin.

“Our initial plan in this case had been to conduct a partial nephrectomy, the surgical removal of the tumour from the kidney, but we soon realised that this was going to be impossible,” elaborated Dr Conradie.

“Due to the large size of the growth and its density, we were compelled to remove the whole kidney, which had been entirely displaced by this huge cancerous growth, which was about the size of a new born baby.”

He said the procedure was greatly complicated by the sheer size of the tumour and took considerably longer than the one-and-a-half-hours initially expected.

“This cancerous growth was life-threatening and we had no choice but to remove it and what remained of the kidney.

I am gratified to say that this operation, one of the most unusual cases which I have been confronted with, was completed very successfully,” he added.

The patient, who preferred not to be named, was discharged from Netcare Waterfall City Hospital just three days after the groundbreaking operation. When the US citizen returned to hospital for a check-up with Dr Conradie two days later, he was in excellent spirits.

“It is remarkable, I already feel much better than I have in a long time and my family and I are grateful that we were able to have Dr Conradie undertake this operation at Netcare Waterfall City Hospital,” he said.

“You aren’t just another number here and the medical care I have received has been nothing short of world class. Contrary to my experience here, in the United States where I have lived for some 35 years now, I was pushed from pillar to post.”

Turned away to die

“The last urologist I saw in the US said to me that he would not undertake an operation on the growth, particularly as I also had heart problems and type 2 diabetes.

"He told me I was too high-risk a patient and he didn’t want to spoil his outstanding surgical record.

"In fact he joked that no one would operate on me in the US ‘except perhaps in Hollywood’!”

The South-African born, but US naturalised, patient said he refused to accept being effectively turned away to die. “I decided I would come to South Africa as I was sure I could get the necessary assistance here.

"I mean, Dr Chris Barnard undertook the first ever heart transplant operation in South Africa in 1967, didn’t he? And, as far as I can see, private medical care here remains cutting edge,” he added.

The patient says he visited a doctor in the US three years ago after suffering back pain and noticing blood in his urine. Scans revealed a 12cm cyst on his left kidney but specialists had told him that it was nothing to worry about, but they did treat his heart condition with a successful bypass operation.

In the meantime, however, the tumour grew rapidly and the patient was told last month that it had grown to a length of 17cm, a depth of 10cm and was inoperable.

“It was terrifying to think nothing could be done for me and I refused to believe this was true,” he admitted.

Expanding on the medical aspects of the patient’s procedure, Dr Conradie said that the surgical team initially expected to be able to drain the cystic fluid from the growth, thereby collapsing it and assessing the feasibility of performing a nephron sparing procedure where only the cancer is removed in an attempt to save the remaining part of the kidney.

“However, during the procedure, we deployed an intra-operative ultrasound scan probe through one of the laparoscopic ports to discover the mass was completely solid and inseparable from the kidney.

Chronic kidney disease on the rise

Can Spirulina help with kidney problems

We live in a world where facts and fiction get blurred
In times of uncertainty you need journalism you can trust. For only R75 per month, you have access to a world of in-depth analyses, investigative journalism, top opinions and a range of features. Journalism strengthens democracy. Invest in the future today.
Subscribe to News24
Next on Health24
100 minute old baby Teddy becomes UK's youngest organ donor