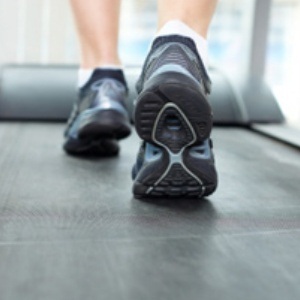 People with poor circulation in their legs benefit from a home-based walking programme and are more likely to keep it up over the long term, according to a new US study.

Researchers say the home-based programme may be more effective at keeping people motivated than hospital-based exercise for a common and disabling problem, and may be a more cost-effective first-line treatment.

"I was somewhat surprised that we achieved our results of a continued difference between the intervention and control groups because it is very difficult to get patients to adhere to an exercise programme long term, even when it is supervised, and our programme was unsupervised, " said Dr Mary McDermott, who led the research.

According to the National Institutes of Health, eight to 12 million people or one in every 20 Americans over the age of 50 has peripheral artery disease, or PAD, a condition caused by plaque build-up in arteries, especially in the legs.

Having PAD significantly raises the chances of heart attack or stroke.

McDermott, a physician and professor at North-western University in Chicago told Reuters Health, "Symptoms of peripheral artery disease are often not classic. A patient might just experience weakness in their legs or tiredness and both the doctor and the patient might think that it's just a part of ageing."

While African Americans are twice as likely as whites to develop the disease, other high risk groups include smokers, diabetics, people with hypertension or high cholesterol and anyone who has had a heart attack or stroke.

There are few treatments for PAD – implanted stents to open the arteries or medication – and exercise. Past research has shown that treadmill walking can improve blood flow and help people with PAD to build up their endurance. But those studies focused on programmes that required patients to go to a hospital or clinic to exercise, according to McDermott and her colleagues.

They wanted to see if a home-based programme might improve motivation to exercise by lessening the burden of travelling to a medical centre three times a week for supervised workouts.

The researchers recruited 194 participants with clogged arteries in their legs and randomly assigned them to two groups for the year-long experiment. One group took part in a structured home-based exercise programme, and the comparison group did not exercise.

Every participant took a six-minute test at the beginning of the study period and again at the end to measure how quickly they could pace back and forth along a 100-foot hallway.

For six months, the home-based exercise group met once a week at an exercise centre to receive instructions and guidance on exercise they'd do at home once a day.

Those assigned to the comparison group also met weekly but at a medical centre and instead of exercise instruction, they received health lectures.

For the second six months of the study, members of the exercise group got a monthly telephone call from their group facilitator. They were encouraged to push themselves by walking five times a week, taking a quick rest when they experienced discomfort, slowly building their way up to a 50-minute walk.

Members of the comparison group were contacted by a study coordinator who went over information related to the health topics in the lectures.

At the end of the study, people in the exercise programme walked faster and farther than those in the comparison group, whose members ended up performing worse than when they started, McDermott's team reports in the Journal of the American Heart Association.

The exercise group improved their six-minute walking distance by 87 feet, from 1 166 ft. at the beginning of the study period to 1253 ft. at the end. Those in the comparison group, on average, walked a distance 25 ft less than they had a year earlier.

McDermott thinks that even more than the monthly motivational phone calls, developing the habit of walking for a set amount of time every day probably had the strongest effect in the exercise group. She believes that continuing the on-site training for a bit longer or instituting ways for the participants to benefit from group support might have resulted in even greater improvement.

"Some of the participants truly bonded with each other and became very engaged in the exercise," McDermott said.

Robert Patterson, a physician and clinical researcher at Brown University, told Reuters Health that exercise, which is considered a more conservative approach to managing peripheral artery disease, should be the first prescription PAD patients receive.

"There are too many people getting what I consider unnecessary stenting or too much stenting," Patterson said. "They come in, they complain, they get a stent that they will have for life."

If a patient tries exercise first and doesn't see substantial results, they should then turn to the more aggressive approach of stenting, he said.

If insurers were to get on board, Patterson adds, it would cost the whole healthcare system less money and possibly reduce the complications associated with people who get stents and must constantly have those stents replaced.

"This study is important. This kind of paper gets at the issue of how we provide this kind of long lasting improved performance to patients in a cost effective fashion," he said.

We live in a world where facts and fiction get blurred
In times of uncertainty you need journalism you can trust. For only R75 per month, you have access to a world of in-depth analyses, investigative journalism, top opinions and a range of features. Journalism strengthens democracy. Invest in the future today.
Subscribe to News24
Related Links
Exercise improves lives of stroke survivors
Walking may reduce inflammation in kidney patients
Walking may reduce stroke risk
Next on Health24
Stroll around the office to restore blood flow to the legs