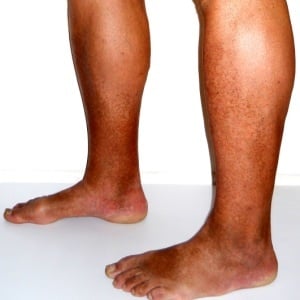 For people with poor circulation in their leg arteries, a medical procedure to restore blood flow may have greater benefits than exercise, preliminary research suggests.

People with peripheral vascular disease (PVD) experience pain and fatigue while walking. These symptoms develop because poor circulation in the arteries that supply blood to the limbs causes damage and scarring in the muscles, the researchers explained.

There is currently no way to reverse the scarring associated with PAD. But a procedure to reopen or bypass blockages in the blood vessels and restore blood flow to the legs also known as revascularisation prevents it from getting worse, the researchers said.

Read: Stroll around the office to restore blood flow to the legs

For the study, the researchers analysed levels of a protein, called TGF-Beta1, that triggers scarring in patients with severe PAD. The investigators also measured levels of collagen, which is the protein found in scars, in biopsies of the patients' calf muscles.

After six months, the researchers compared the biopsy results among 20 patients who underwent procedures to restore blood flow, 19 patients who completed a supervised exercise programme, and 17 who had no treatment (the "control" group).

Neither of the treatment groups saw a reduction in scarring associated with PAD, but procedures to restore blood flow stopped it from getting worse, the findings showed.

The study also found that collagen fibres and TGF-Beta1 levels increased in the exercise and control groups. Levels of these proteins, however, did not increase in the revascularisation group.

"This suggests that the long-term benefits to the health of leg muscles is better with revascularisation than with exercise therapy alone," study author Duy Ha said in a news release from the American Heart Association. Ha is a doctoral candidate in cellular and integrative physiology at the University of Nebraska Medical Centre in Omaha.

"Unfortunately, not all patients are candidates for these procedures, which carry significant risks, and the treated vessels may get blocked again," Ha added.

The study authors reported that patients in both treatment groups saw improvements in how long they could walk on a treadmill before their pain forced them to stop. However, only those in the revascularisation group improved the distance they could walk within six minutes.

"We hope that we can develop therapies that directly decrease TGF-Beta1 and its associated scarring in the leg muscles of PAD patients. Such new treatments, when used alone or along with revascularisation and exercise, may maintain or enhance the ability of our patients to walk and live healthy lives," Ha said.

The findings were to be presented at the annual meeting of the American Heart Association, in Nashville, Tennessee. Findings presented at meetings are generally viewed as preliminary until published in a peer-reviewed journal.

We live in a world where facts and fiction get blurred
In times of uncertainty you need journalism you can trust. For only R75 per month, you have access to a world of in-depth analyses, investigative journalism, top opinions and a range of features. Journalism strengthens democracy. Invest in the future today.
Subscribe to News24
Next on Health24
Home-based exercise programmes more effective