What is hepatitis B? 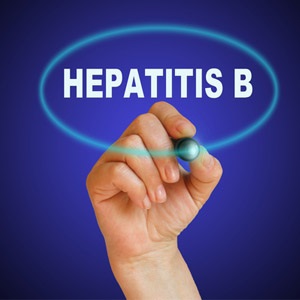 Hepatitis B is an infectious liver disease caused by a blood-borne virus called the hepatitis B virus, or HBV.

After infection an individual will have an acute phase of hepatitis, with or without symptoms. Thereafter the individual’s own immune response will clear most of the HBV infections.

In about 5% of infected adults, their immune systems are unable to clear the HBV, which results in ongoing virus replication in the liver.

Persistent infection is more common in individuals infected at an early age; 90% of children infected at birth and about a third of young children under age five years will not clear the infection. Individuals with a defective immune system, like HIV infected persons, are also more prone to ongoing disease.

If viral replication persists beyond six months, it is referred to as "chronic" HBV infection. These individuals are considered "carriers" of HBV.

HBV infection is the most common chronic viral infection in the world, with over 350 million HBV carriers worldwide. Hepatitis B infections cause more than half a million deaths annually.

Chronic HBV infection is less than 1% in the other population groups in South Africa, with the exception of the very small Chinese community (4%).

South Africa has had one of the highest rates of liver cancer in the world, and this is linked to the high rate of hepatitis B.

Since the introduction of hepatitis B vaccinations of all children in 1995, it is hoped that the disease and its complications will soon become far less prevalent.

Symptoms of hepatitis B

Causes of hepatitis B

We live in a world where facts and fiction get blurred
In times of uncertainty you need journalism you can trust. For only R75 per month, you have access to a world of in-depth analyses, investigative journalism, top opinions and a range of features. Journalism strengthens democracy. Invest in the future today.
Subscribe to News24
Next on Health24
New hep C drug works much faster