Meet the Orthodontist behind the world-class practice

Having recently embarked on my ‘braces’ journey I was put in touch with Cape Town based Orthodontist, Dr. Sharad Cara. I didn’t think much when a few months into the process I was told that the practice would be closed for a few weeks for renovations, but was absolutely delighted by the transformation when I arrived for first post-renovation appointment.

The renovation literally wowed me with state of the art dental equipment, a trendy modern interior and an integrated digitized operation which together provide an all-round top class experience for his patients. But what inspired such a decision? We caught up with Dr. Cara to get the details and the numbers!

What inspired the practice renovation?

“When I started my practice here 10 years ago there simply wasn’t enough funding to do what I wanted, how I wanted it. I had just completed my studies – a four-year orthodontic specialization – after 11 years of practicing general dentistry. In order to study orthodontics full-time I’d had to make a few lifestyle changes.

“So when I opened this practice the budget was of course tight, and like all orthodontists,  I always knew I wanted my practice to be of world class standards - I wanted everything set up as efficiently and as streamlined as possible. So I’ve been planning this renovation in my mind for the past 10 years.

“The main reason, however, was because I knew that it would make the experience for my patients nice as well.” 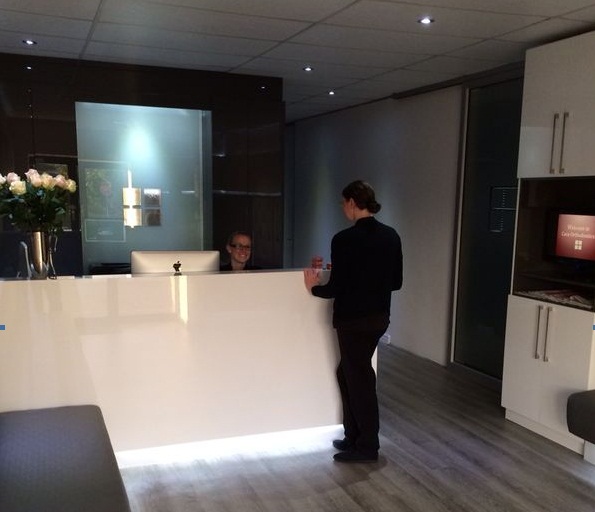 What makes the practice great?

“I just want everything to work perfectly and run smoothly and seamlessly. So the new dental equipment was a little bit of an indulgence  for myself and my staff.

“I’ve been digitizing the practice over the past few years, and we are now almost entirely digitized. We use software created specifically for Orthodontists called Dolphin, which I was able to buy in modules.” Dr. Cara shares that it is well worth it to have a highly efficient practice management system, and as more modules are developed, they can be bought and added on to the existing system. “The first point of use is when the patient walks into the practice and ‘checks in’ using the biometric finger print scanner. It uses the fingerprint to check the patient in but in line with the software developer’s high security priority, the actual print is never accessible to me.” It’s kind of like a password that even the software developers can’t ever see because it’s encrypted in the database.

The software also allows you to upload photographs, scans, x-rays and loads them all immediately and directly into the system. “The file sizes are much smaller than the previous method of storing them manually, so I don’t require all that hard drive space anymore. Also, with the x-rays, there’s no longer a need for light boxes, developer solution and paper to trace out points on x-rays – the software does it all automatically. This saves so much time!” Dr. Cara gave us a demo of how the software also does treatment simulation – this enables you to see what a patient may potentially look like after moving teeth a certain distance or angle. Clearly an appreciator of fine technology, Dr. Cara has had the practice fitted out with Apple products all around. With great excitement Dr. Cara tells us that the next Dolphin module, which has been released in the United States but is not in SA yet, is a mobile application for patients, which he already has on order. “It integrates into my software so that I can allow patients to view certain aspects of their files such as appointments and their accounts. I’ve already ordered it and it will be active within a few months

Being kind to the environment

“I’m in the process of taking the last step toward having a paperless practice: Once the software is available, we’ll be getting iPads so that new patients can fill in all their information digitally, and signature pads to complete the authorization process with zero paper required.”

Apart from the beautiful aesthetics of the newly renovated practice and the state of the art technological and dental equipment, Dr. Cara himself keeps in touch with advances in Orthodontics

Named after the father of Orthodontics, the by-invitation-only ‘Edward H. Angle Society of Orthodontists’ has invited Dr. Cara to show his cases at the annual society meeting in Southern California in 2015. Dr. Cara has been attending, as a guest, for the past 3 years, but in 2015 will present his cases in order to be a member of the society. In line with the society’s need for each case presented to meet the highest standards of Orthodontic practice, Dr. Cara approaches every patient’s treatment as a potential ‘Angle case’ – in this drive toward excellence. Attending this annual event also enables him to connect with peers from around the world, including his Orthodontist friends from Germany, the UK and Japan. This connection to global developments enables Dr. Cara to remain at the frontier of Orthodontics. “I am proud to say that as a member of the South African Society of Orthodontists, I can hold my head up high and confidently say that we are in line with world class standards.”

Apple Founder Steve Job’s said, “Be a yardstick of quality. Some people aren’t used to an environment where excellence is expected.” After meeting Dr. Cara and having a tour of his practice, it’s not hard to believe then when he tells us that this is the credo he lives by.

We live in a world where facts and fiction get blurred
In times of uncertainty you need journalism you can trust. For only R75 per month, you have access to a world of in-depth analyses, investigative journalism, top opinions and a range of features. Journalism strengthens democracy. Invest in the future today.
Subscribe to News24
Related Links
Your teeth - the basics
Lasers may help regrow teeth
Eat for good oral health
Next on Health24
Relief from dental anxiety