It's common for psoriasis to flare up on the hands, but it can cover larger areas of skin.

Psoriasis is a chronic skin disease that causes scaling and inflammation.

Not only is this skin disease uncomfortable and unsightly, but now research has shown that it can be linked to overall bad health, leading to earlier death.

What's more, people with severe cases of the skin disease psoriasis appeared to have almost double the risk of dying during a four-year study than people without the condition, research suggests.

The study was published in the Journal of Investigative Dermatology.

But the increased death rate was only seen in those with psoriasis affecting more than 10% of their body surface area. For those with less-severe disease, the risk of dying early was actually less than it was for people who didn't have the skin condition. 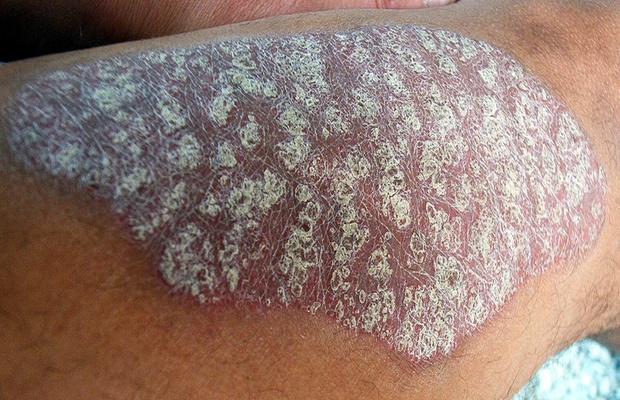 Psoriasis can appear on large areas of the skin, causing thick, scaly flakes and inflammation.

Psoriasis can be linked to bad health

Dr Robert Kirsner, chair of dermatology at the University of Miami Miller School of Medicine, said that over the last decade or so, doctors have learned that people with psoriasis tend to be less healthy.

"They are overweight, have diabetes mellitus, smoke, drink and have high cholesterol," he said.

"These factors – as well as the presence of psoriasis itself – increase their risk for vascular disease and other poor medical outcomes. As a result, they more often have heart attacks and strokes and more often die," Kirsner said. He wasn't involved in the current research, but did review the findings.

Kirsner and study author Dr Megan Noe suggested that people with severe psoriasis talk with their doctor about treating their psoriasis and controlling risk factors that may contribute to a higher risk of early death, such as smoking, high cholesterol and diabetes.

It's also important to note that it's not clear from this study alone whether severe psoriasis actually causes a higher death rate, or if there's just an association between those factors.

More likely to smoke and drink

The study included nearly 8 800 adults with psoriasis and almost 88 000 without the condition. The study participants were followed for about four years on average. Thye all lived in the United Kingdom. About half were women and the average age was 45. Those with psoriasis were more likely to smoke and to drink alcohol.

After the researchers adjusted their statistics so they wouldn't be thrown off by factors such as smoking and diabetes, they found that those with the highest level of psoriasis – affecting more than 10% of their body surface – were nearly two times more likely to die over the period of the study.

About 12% of the psoriasis patients fell into the severe category, the researchers said.

When it comes to death rates, severe psoriasis is riskier than smoking and but less risky than diabetes, said Noe. She teaches clinical dermatology at the University of Pennsylvania.

People with less-severe psoriasis were slightly less likely to die than the general population. And, that held true even when the researchers took other risk factors into account, such as age, smoking status and weight.

There are theories, but not firm evidence, about why there's a link between extreme psoriasis and higher death rates, Kirsner said. One theory is that psoriasis creates more inflammation – swelling – in the body, which hurts the arteries and veins.

It's also possible that people with psoriasis already have body-wide inflammation that isn't caused by the skin condition.

Another possibility is that the social stigma of psoriasis could contribute to mental conditions, such as depression, by making it harder for patients to do certain things, including finding a job, Noe suggested.

Should patients with extreme psoriasis be very worried about their condition? Kirsner said that in terms of a higher risk of premature death, "we know that worse psoriasis and having psoriasis longer are important, but the individual risk for any given patient is not clear."

The researchers didn't estimate average life span in this study.

Patients with psoriasis, especially severe psoriasis, should work with their doctors to treat the condition, reduce their cholesterol, stop smoking, lower their weight, control their blood sugar, exercise and take aspirin, Kirsner said. The American National Psoriasis Foundation recommends talking with your doctor about the risks and benefits of medications, such as aspirin, before taking them.

Noe said, "We have lots of very successful treatments, and the newer biologic medications work for most people."

However, Kirsner added, while "treatments likely matter, whether any treatment will help reduce risk is not clearly known."

According to Health24, psoriasis is treated according to the severity of the outbreak. Treatment options include:

We live in a world where facts and fiction get blurred
In times of uncertainty you need journalism you can trust. For only R75 per month, you have access to a world of in-depth analyses, investigative journalism, top opinions and a range of features. Journalism strengthens democracy. Invest in the future today.
Subscribe to News24
Related Links
Scientists pinpoint cause of genetic skin disorder
Psoriasis associated with depression
Heart disease linked to psoriasis, rheumatoid arthritis
Next on Health24
'Butthole sunning' to boost your energy? It’s not the answer, says a dermatologist