Rosacea is a fairly common chronic, inflammatory disease of the face. It is characterised by redness and red bumps (papules) on the cheeks and possibly the forehead, cheeks, chin and nose. It also sometimes affects the eyes.

Adults, especially women between the ages of 40 and 50, are mostly affected. However, the condition occurs in both sexes and among people of all ages and skin types (even though there is a slightly higher risk among people with fair skin).

Rosacea, previously called "acne rosacea", has nothing to do with "ordinary" acne. Although rosacea can lead to red bumps on the face, no link has been found between rosacea and the bacteria usually associated with pimples.

Blackheads (comedones), a common feature of acne, are also not associated with rosacea.

The exact cause of rosacea is unknown, but it is believed that several factors may be involved. It has been suggested that environmental and genetic factors may play a role and some researchers believe that blood vessels which expand too easily may be a causative factor. 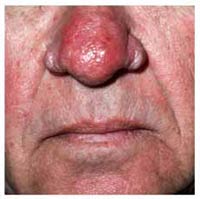 Subtype 3: Skin thickening and enlargement, usually around the nose. Subtype 4: Watery or bloodshot appearance, irritation, burning or stinging of the eyes.

A clinical examination by a dermatologist would determine if you have rosacea. In some cases, a skin biopsy might be necessary.

If eye problems occur, your dermatologist may refer you to an ophthalmologist for examination.

The condition, though chronic, fluctuates in most people. For this reason, treatment may only be needed intermittently.

It's important to consult a dermatologist for topical and/or systemic (oral) therapy. This may include treatment with a topical gel containing metronidazole or administration of oral tetracycline (an antibiotic).

Red veins can be treated by cautery. This is painful and there is a risk of scarring.

Laser treatment is also an option for later-stage rosacea. Note that this should only be performed by a qualified dermatologist who specialises in laser treatment.

An opthalmologist should be consulted if eye problems occur. Steroid eye drops and oral antibiotics may be prescribed.

Rosacea is a chronic condition for which there is no cure. However, with the correct treatment, the condition can be controlled in most people. While the papules and pustules are relatively simple to treat, the redness and spidery blood vessels can be more persistent.

Medical treatment is usually required. Your best approach would be to consult a dermatologist who can examine the area and decide on the appropriate treatment. The earlier you seek treatment, the better.

How can rosacea be prevented?

Too little is known about the exact cause to recommend preventative steps for people who don't have rosacea.

However, the following actions may help to prevent flare-ups if you have been diagnosed with the condition:

We live in a world where facts and fiction get blurred
In times of uncertainty you need journalism you can trust. For 14 free days, you can have access to a world of in-depth analyses, investigative journalism, top opinions and a range of features. Journalism strengthens democracy. Invest in the future today. Thereafter you will be billed R75 per month. You can cancel anytime and if you cancel within 14 days you won't be billed.
Subscribe to News24
Next on Health24
Eczema in children