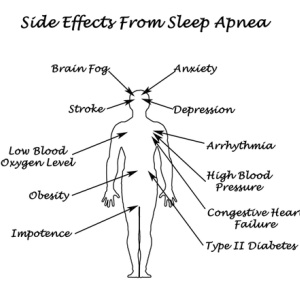 For people with mild to moderate obstructive sleep apnoea, an oral device that adjusts the lower jaw during sleep may help treat snoring or restless legs, according to a new study.

But the jaw adjusters do not improve daytime sleepiness, which was the main endpoint of the study.

Sleep apnoea can cause symptoms like daytime sleepiness, headache and restless legs and has been tied to high blood pressure and stroke risk. The most effective way to treat it is to wear a CPAP (continuous positive airway pressure) mask at night, with a constant flow of breathable air keeping the upper airways open.

"CPAP is the most effective treatment, but has drawbacks in terms of tolerability because of problems with nasal stuffiness, claustrophobia or worries about disturbing bed partners," said lead author Marie Marklund of the odontology department at Umea University in Sweden.

Another option for mild or moderate apnoea is a device that holds the lower jaw, or mandible, and the tongue forward during sleep.

"Mandibular advancement devices were developed in the early 1980's, about the same time as CPAP was invented," Marklund said.

For the present study, she and her co-authors randomly divided 91 adults with snoring and daytime sleepiness, or mild to moderate sleep apnoea, into two groups. One group received custom-made mandible devices that advanced the lower jaw by at least six millimetres. The other group received a similar looking splint device that did not advance the lower jaw at all.

On average, participants in both groups wore their devices for more than 80 percent of nights over the four-month study period, and most used them for the whole night rather than just part of the night.

But based on questionnaires and sleep observation studies, the custom mandible adjuster did not appear to improve daytime sleepiness or quality of life any more than the placebo device, the authors reported in JAMA Internal Medicine.

There are a wide variety of mandibular advancement devices in the field, but there's a shortage of "well performed, randomized, sham-controlled studies", according to Dr. Winfried J. Randerath of Bethanien Hospital in Solingen, Germany. Randerath wrote an editorial accompanying the new results.

The device did improve daytime sleepiness as compared to baseline, but so did the placebo device, he told Reuters Health by email.

"This does not mean that they are not effective regarding the symptoms," Randerath said. "However, it points out that the placebo effect of the sham devices has to be taken into account when interpreting a change of these parameters."

Snoring and restless legs symptoms were less frequent in the mandible device group than the comparison group, but headache and insomnia symptoms did not differ.

"It was unexpected that there was no effect on daytime sleepiness and quality of life compared with the placebo device," Marklund told Reuters Health by email.

Daytime sleepiness has many causes and just treating sleep apnoea may not address them all, she said.

Your doctor can help decide which is the best treatment for you, she said.

"Milder sleep apnoea patients or snorers can choose a mandibular advancement device, provided that there are no other concomitant diseases that need an effective sleep apnoea treatment," Marklund said.

We live in a world where facts and fiction get blurred
In times of uncertainty you need journalism you can trust. For 14 free days, you can have access to a world of in-depth analyses, investigative journalism, top opinions and a range of features. Journalism strengthens democracy. Invest in the future today. Thereafter you will be billed R75 per month. You can cancel anytime and if you cancel within 14 days you won't be billed.
Subscribe to News24
Next on Health24
A fat tongue may be disrupting your sleep