Real stories: ‘How I quit smoking’ 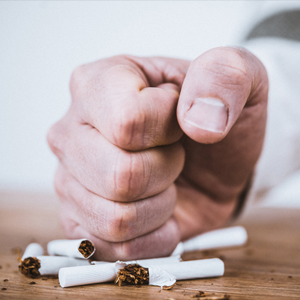 There are many methods out there that can help you quit smoking.

There are many different methods that people use to quit smoking. What works for one person, might, however, not work for you.

However, if you are thinking of making 2019 the year you finally kick the habit, take some encouragement from these stories we've collected about how people managed to quit smoking:

‘I only allowed myself to smoke really bad cigarettes’

Adele Maria decided to stop smoking because when she walked up a ramp at her college campus she felt like she would die from shortness of breath. After three years of smoking, she knew she had to quit. Her strategy was interesting and perhaps somewhat unconventional. "I allowed myself to smoke only really bad cigarettes, with terrible taste," she said. "The taste and the feeling of smoking these cigarettes were so bad that not only did I quit, but they also gross me out now. And, also, I would always eat baby carrots whenever I felt like smoking."

Quitting cold turkey won’t necessarily work for everyone. Val Allen tried everything from Chantix (Champix) to Nicorette without any success. "Finally I worked with noted hypnotist Ricky Kalmon who taught me how to do self-hypnosis. It worked for a while but then I stopped and went back to smoking. Finally, about a year ago I caught a cold that turned into bronchitis. I think the health scare coupled with the hypnosis kicked in, and I haven’t smoked since." When Joseph Rainey was ready to quit in 1988, he decided to wean himself off the habit gradually. “On each pack of smokes I put a post-it note on which I drew 20 small circles, one for each cigarette,” he said. His goal was to smoke two cigarettes from each pack every day. "Every time I lit up I imagined my children’s mother telling me I smelled of cigs. I imagined my oldest daughter Jessica asking me to quit smoking. I imagined my new baby daughter Hilary and my desire to live long enough to see her grow up. This process resulted in going from roughly three packs a day to six a day in less than six months."

‘A throat spray helped me quit’

Sarah Palmer* began smoking after a break up. At first she smoked at home to fill up her time, and then gradually it became a social habit. "Then I found myself smoking up to 20 cigarettes a day. I’d wake up in the morning feeling groggy with a sore throat," she said.

She also loved singing. "I sing for family and at amateur plays; it’s something I’ve always loved. But I noticed after I started smoking that it had an impact on my voice. My voice became quite croaky and it was quite painful when I was singing."

She also realised it was affecting her fitness. "I was rushing to work one morning," she said. "I ran up the escalator because I was late and I was out of breath when I reached the top. It was then that I realised I wanted to feel better about myself.”

Rather than go on a break-up diet or get a new hairstyle, Sarah wanted to get fit. “I decided it was time to quit smoking. I started using Nicorette quick mist spray. I wanted something discreet, and when I took it out my bag it just looked like I was using a breath spray. Anytime I was craving a cigarette, I would have a spray.”

She used the money she would normally use on cigarettes on some new trainers and the fitness bug bit her. “Quitting smoking has really given me a new lease on life and it’s really improved my fitness and I’ve even got my singing voice back.” Edward Smith* smoked about 15 cigarettes a day. "The idea of quitting was always quite daunting and I never thought I could go one day without a cigarette. I tried to go cold turkey to quit but I realised it wasn’t going to work. There needed to be a gradual process."

He was at work when a colleague suggested he try gum. “It made the whole thing a lot easier. It’s discreet and everyone chews gum. You don’t have to advertise the fact that ‘I’ve quit smoking’. You fit in with everyone else which is quite nice.”

He also says he didn’t realise how much smoking had affected his appearance until he stopped. “Since being cigarette free I’ve had people tell me my hair’s better, my complexion is better, my teeth are much whiter, and I’ve got my sense of smell and taste back.”

Viyon Hammond had been a smoker for six years until he decided it was time to quit. “I was smoking a packet a day," he said. "I finally decided to put out my last cigarette seven months ago. I realised that I was lying to myself by saying that smoking helps me to relax or keep me busy.”

Viyon read Alan Carr’s The Easy Way to Stop Smoking and finally managed to quit for good. “It’s a really powerful book that makes you realise that smoking is a silly habit nobody should have. Quitting smoking was tough, especially in the first week, but it gets easier. Now I don’t crave cigarettes. I wasn’t really addicted to cigarettes; I just carried the wrong belief that they would make me feel better.”

His advice for quitting? “Just do it! Don’t light that next cigarette. You weren’t born craving a cigarette – it’s a habit you’ve developed; it was a choice you made to start smoking. Use that same choice to stop.” ‘I created no smoking zones’

Susan Berkley* quit smoking on 1 March 1994 after smoking for 50 years. She says she used two techniques. “One, I regularly reduced the amount that I smoked by 50%; and two, I established and gradually increased ‘no smoking times and places’.”

She also established no smoking zones and began with no smoking while on the phone, no smoking in the car, bathroom and bedroom. “When I was down to two cigarettes a day, I realised that I spent a lot of time just deciding when to smoke those two – what an addiction! At that point, I stopped entirely, and got rid of all the cigarettes in the house. After about a month, I felt okay.”

We live in a world where facts and fiction get blurred
In times of uncertainty you need journalism you can trust. For only R75 per month, you have access to a world of in-depth analyses, investigative journalism, top opinions and a range of features. Journalism strengthens democracy. Invest in the future today.
Subscribe to News24
Related Links
The sooner you quit smoking, the better
This is why it's so hard to quit smoking
Nicotine replacement therapy: What you should know
Next on Health24
Breaking the smoking-drinking connection