Vaping could up risks for asthma, COPD and other lung diseases 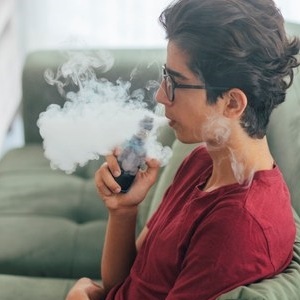 Vaping is not harmless.

As if the news on vaping wasn't bad enough, a new study suggests that e-cigarette users are also at significantly higher risk of chronic lung diseases such as asthma, bronchitis, emphysema and COPD.

E-cigarettes harmful on their own

"What we found is that for e-cigarette users, the odds of developing lung disease increased by about a third, even after controlling for their tobacco use and their clinical and demographic information," said study senior author Stanton Glantz. He directs the Center for Tobacco Control Research and Education at the University of California, San Francisco.

In the new study, Glantz's team tracked data on the cigarette and e-cigarette use of more than 32 000 US adults, none of whom had lung disease at the start of the study.

The researchers then recorded new lung disease diagnoses over the years 2013 to 2016. Those diagnoses included such common and debilitating illnesses as asthma, bronchitis, emphysema and chronic obstructive pulmonary disorder (COPD).

"We concluded that e-cigarettes are harmful on their own, and the effects are independent of smoking conventional tobacco," Glantz said in a UCSF news release.

Current and former e-cigarette users were 30% more likely to develop chronic lung disease, while tobacco smokers had more than 2.6-times increased risk. For people who vaped and smoked, risks of developing a lung disease more than tripled.

"Dual users – the most common use pattern among people who use e-cigarettes – get the combined risk of e-cigarettes and conventional cigarettes, so they're actually worse off than tobacco smokers," Glantz said. The study couldn't prove cause and effect, however, only associations.

The new findings were published in the American Journal of Preventive Medicine.

These findings are particularly relevant as the debate continues over whether e-cigarettes should be promoted as a "harm-reduction" tool for smokers looking to wean off traditional tobacco, the researchers said.

While they found that switching from smoked tobacco to e-cigarettes lowered the risk of developing lung disease, fewer than 1% of the smokers in the study had completely switched to e-cigarettes.

"Switching from conventional cigarettes to e-cigarettes exclusively could reduce the risk of lung disease, but very few people do it," Glantz noted. "For most smokers, they simply add e-cigarettes and become dual users, significantly increasing their risk of developing lung disease above just smoking."

Inhaling any foreign substance is bad

The researchers also noted that their findings are unrelated to the recent and highly publicized cases of acute lung disease linked to e-cigarette use – those were severe, sudden-onset cases that resulted in hospitalisation and death. More than 2 400 such cases have now been reported, the US Centers for Disease Control and Prevention announced on Thursday.

Instead, "this study contributes to the growing case that e-cigarettes have long-term adverse effects on health and are making the tobacco epidemic worse," Glantz said.

Two experts in lung health who reviewed the new study said it highlights another reason to avoid vaping and smoking.

"While vaping e-cigarettes was thought to be safe [apart from nicotine addiction], this study makes it clear that vaping nicotine is associated with pulmonary diseases such as asthma and COPD," said Dr Len Horovitz, a pulmonary specialist at Lenox Hill Hospital in New York City.

Dr Sameer Khanijo directs the Respiratory Care Unit at North Shore University Hospital in Manhasset, New York. He said the message is clear: "Smoking is harmful. E-cigarette use is harmful. Inhaling any foreign substance into the lungs is bad."

We live in a world where facts and fiction get blurred
In times of uncertainty you need journalism you can trust. For 14 free days, you can have access to a world of in-depth analyses, investigative journalism, top opinions and a range of features. Journalism strengthens democracy. Invest in the future today. Thereafter you will be billed R75 per month. You can cancel anytime and if you cancel within 14 days you won't be billed.
Subscribe to News24
Related Links
Another possible coronavirus health threat: too few asthma inhalers
More studies link vaping to asthma and COPD
Vitamin E oil might be cause of vaping-linked lung injuries
Next on Health24
Smoking while pregnant may weaken baby's bones