A call by the Treatment Action Campaign (TAC) and partner organisations for Members of Parliament (MP's) to get tested for tuberculosis (TB), which is one of the leading causes of deaths in South Africa, has fallen on deaf ears.

Throngs of people marched in the sweltering heat to Parliament in Cape Town on Tuesday to mark World TB Day.

They were wearing surgical masks and chanting "TB is an emergency", "We are dying of TB" and "Make TB a medical emergency" in an attempt to get the government to step up the fight against TB.

READ: Can you get TB from animals?

TB is an infectious bacterial disease that is caused by a germ that most commonly attacks and damages the lungs. It can be easily passed to others.

"We marched to ask MPs to show their solidarity with our struggle against TB. The idea was that getting tested would help break down the barriers between the MPs and the daily struggles that hundreds of thousands of people in this country face with TB," TAC head of policy Marcus Low told Health24.

"Not one MP came to get tested in response to our call".

Low said this echoes the wider indifference toward the TB crisis. "While the Minister of Health Aaron Motsoaledi sets in place good policy, the rest of government - albeit in the executive or in the legislature, seem indifferent to this disease that kills so many people, especially poor people, in our country."

A mobile testing clinic by the Desmond Tutu TB Centre was set up outside Parliament.

"Permission to set the clinic up inside or just outside parliament was denied late on Monday afternoon. We went ahead and parked a testing caravan in a parking spot near the entrance to parliament," said Low.

Sue-Ann Meehan, principal investigator at the Desmond Tutu TB Centre, confirmed to Health24 that they were unable to provide TB testing services at the march.

"We were unable to provide TB testing services, but took advantage of the large crowd and provided information around TB".

READ: Why you need fresh air when using public transport

She said they handed out pocket size pamphlets containing pertinent TB information and contact details of all the clinics around Cape Town who provide TB services.

At the march, a memorandum was also handed over to deputy secretary of parliament Baby Tyawa by TAC member Phumeza Runeyi. It was signed by TAC and other civil society movements including Sonke, Diamond Life Projects, SPII, SWEAT, the People’s Health Movement, Medecins sans Frontieres, the United Front and the Desmond Tutu HIV Foundation.

Some of the demands include:

"South Africa urgently needs reform of our patent laws to ensure that we can access new life-saving medicines," said Low.

He explained that this does not mean a rejection of the patent system, but that the law should be reformed to provide a better balance between the Constitutional right to access healthcare and the private interests of multinational pharmaceutical companies.

READ: TB: the side only doctors see

When a product is under patent, there is no competition and the price often stays high because the company who holds the patent can charge whatever they want for a 20 year patent period.

This means that medicines under patent are often unavailable to the majority of the population. Therefore, while patents are meant to serve the public by encouraging companies to invent new products, they can also harm the public by preventing those in need of medicines from accessing them.

An example of this is Linezolid, one of the few drugs available to treat Multi-Drug Resistant TB (MDR-TB), which costs about $2 500 (about R29 500) per month of treatment because of patent protection.

Linezolid is not available from public sector healthcare providers, but the TAC wants the department of health to ensure that patients have access to Linezolid when clinically justified.

"There are a set of reforms in line with international law that have already been made in countries like Argentina, Brazil and India. Our government must take similar steps to protect its citizens," said Low.

Have a look at the these images of the march:

People holding a banner with the words: We die of TB. (Image: Laura van Niekerk)

People gathered in their hundred outside of Parliament in Cape Town . (Image: Laura van Niekerk) 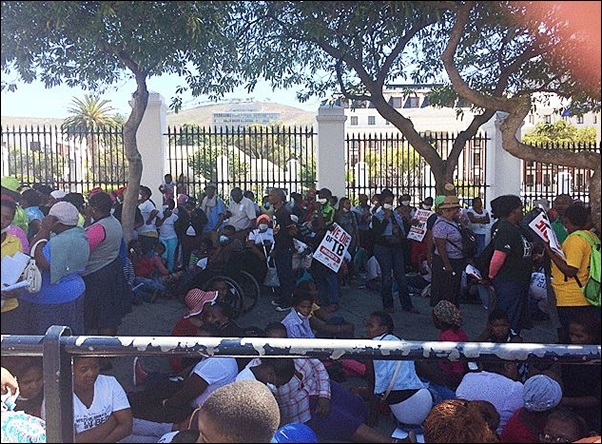 Some sat quietly while speakers made their demands heard. (Image: Laura van Niekerk) Some speakers urged the government to respond to TB the same way it has handled HIV/Aids. (Image: Laura van Niekerk)

Brush up on your TB knowledge

15 Facts you need to know now about Tuberculosis