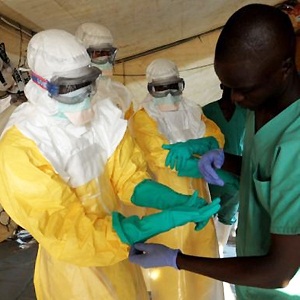 The World Health Organization has confirmed this is the worst ever outbreak of this strain of haemorrhagic fever, first identified 38 years ago in the Democratic Republic of Congo, then Zaire.

Ebola is one of several viruses responsible for haemorrhagic fever.

Is South Africa at risk?

Theoretically, an outbreak anywhere on the globe, including South Africa that receives regular visitor influx from west Africa, is just a plane flight or boat or bus ride away.

Health Minister Aaron Motsoaledi has said that there is no need for South Africans to panic. He said that precautions were being taken to prevent the virus from entering the country and assured South Africans that the surveillance activities in place were extremely effective.

The Head of Medical Virology at the University of Stellenbosch, Professor Wolfgang Preiser told The Daily Maverick that the most likely scenario is when better-off people in the area come to South Africa for treatment - similar to the Gabon case in 1996.

Read: Stay updated on Ebola with the Ebola Alerts page of the National Institute of Communicable Diseases

The 1996 case of Ebola in South Africa

Dr Mark Gendreau who specialises in aviation medicine at Lahey Medical Centre in Peabody, Massachusits, told NPR (National Public Radio in the US) that the virus is not that easily transmitted.

He recalled the case of a Gabon man who had clear symptoms of Ebola and who boarded a plane to Johannesburg to seek medical treatment in 1996. He had a fever above 41 degrees C and signs of internal bleeding.

The man reached the hospital where he was treated and he didn't infect anyone during his flight or other travels, the European Centre for Disease Prevention and Control reported, although other reports - that cannot yet be verified - state that he infected a nurse at the hospital and she died of the disease.

Whether the virus spreads rapidly depends on how many people are infected (1 201 cases reported during current outbreak) and the degree of travel from the outbreak area.

Exclusive: South African woman fleeing Sierra Leone talks to Health24 about the situation on the ground

The current outbreak is the deadliest ever on record, and is currently not under control.

Ebola kills up to 90% of those it infects, this rate is especially high in countries with poor healthcare and a populace unwilling to receive treatment, as is the case in the aforementioned African nations.

Aside from its lethality, Ebola is also highly, highly contagious. The disease has an incubation period of up to 21 days and takes between 1 and 2 weeks to kill sufferers once symptoms begin to manifest themselves. There is currently no cure for the illness.

How is Ebola transmitted?

Ebola is spread by coming into contact with the bodily fluids of infected animals or individuals, or people who died from the disease. This includes sweat, blood and saliva.

The infectious potential of the disease is such that coming into contact with a single drop of sweat or spit from an infected person - and then transmitting the virus to your nose or mouth when you touch these organs - could cause a completely healthy to become infected.

It is also often transmitted to medical personnel via hypodermic needles used in treating patients with Ebola fever, and to lab personnel who handle samples.

Read: Why did the Ebola outbreak occur in west Africa?

There are several strains of Ebola. Genome sampling of infected patients has suggested that the current outbreak is due to the Zaire strain, which is the deadliest strain known to man.

The disease can also be caught from infected animals. According to the WHO, animals that may carry the illness include Gorillas, monkeys, fruit bats and porcupines. Infected fruit bats in particular have been known to travel as far as New Zealand and do not show any symptoms of the disease.

Read: A Sierra Leone study offers clues as to why some survive Ebola

Compounding this problem is the fact that Ebola is a haemorrhagic virus, meaning that it causes large amounts of bleeding in infected individuals. Combined with the fact that fever causes sufferers to sweat profusely one can see how the transmission vector of the illness is, in a sense, self-propogating.

The ease of transmission is the reason why so many medical professionals succumb to the illness when treating it. In addition to the death of Dr. Samuel Brisbane in Liberia, the Sierra Leone Ministry of Health also announced that its leading physician, Sheikh Umar Khan is also battling the disease.

Nurses have abandoned hospitals with confirmed cases of the disease after several died as a result of treating infected people. Doctors treating the illnesses now wear positive-pressure suits to similar to those worn by those dealing with toxic chemicals.

A statement by the National Institute for Communicable Diseases read thus.

"While the risk of introduction of Ebola virus into South Africa is considered low, we strongly recommend that surveillance for viral haemorrhagic fevers (and at present, particularly EVD), be strengthened.

This should be done primarily through Port Health services, but it is also extremely important that public and private practitioners are on the alert for any ill persons that have travelled to viral haemorrhagic fever risk areas. There needs to be a high index of suspicion for EVD in health workers from the affected region with unexplained fever."

In South Africa, the Department of Health has written a ministerial letter to convene an inter-ministerial committee on EVD.

The preparedness activities are coordinated at two levels:

All provinces in 44 districts have trained outbreak response teams and regular meetings are convened at national level to monitor the EVD outbreak and preparedness measures.

11 Hospitals around the country are prepared to deal with Ebola patients, two each in Gauteng and the Eastern Cape, and one in each of the remaining 7 provinces. All hospitals have isolation facilities and protective gear for healthcare workers.

Surveillance entails monitoring travellers for signs of illness, such as a high temperature or sweating. However, in its early phases, Ebola is often mistaken for other viruses including Malaria and Influenza and a person infected with Ebola could simply take a painkiller to reduce his or her temperature and so pass any fever screenings.

How a lie and a painkiller can get Ebola sufferers through airport checks
How prepared is South Africa for an Ebola outbreak?
South Africa steps up Ebola response
Epidemic out of control - WHO
Stay up to date: All the latest news on Ebola
Sources: Mashable/WHO/PLOS

We live in a world where facts and fiction get blurred
In times of uncertainty you need journalism you can trust. For 14 free days, you can have access to a world of in-depth analyses, investigative journalism, top opinions and a range of features. Journalism strengthens democracy. Invest in the future today. Thereafter you will be billed R75 per month. You can cancel anytime and if you cancel within 14 days you won't be billed.
Subscribe to News24
Related Links
A Sierra Leone study offers clues as to why some survive Ebola
Ebola appears to be slowing in Liberia
Next on Health24
Ebola strikes West Africa again: Key questions and lessons from the past