The wise woman told the two young men to switch camels. If one of them wins the race on his rival’s camel, his own camel will come in last and he’ll get to marry the mischievous princess.

A simple answer, but elegant and clever – and a great example of lateral thinking. A highly unfamiliar problem (a “race” to be slowest) requires a whole new way of problem-solving. We may have to overturn deep assumptions and beliefs (eg. what we know about conventional races and racing) to come up with a solution.

You only need to make three cuts.

In one chain, cut each link to make three separate links.

Then use these three loose links to join together the ends of the three remaining chains.

Again, this is a clever example of lateral thinking. Most people will fixate on joining the ends of the four chains together, rather than seeing that one chain can be broken up and the links used individually. This puzzle also stretches our visualization abilities and spatial skills.

Here is the solution: 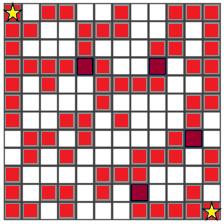 This puzzle is actually a type of maze (a “block maze”).

Mazes test the parts of the brain involved in spatial navigation and learning, and are often used in psychology experiments to study these functions in rats or mice. Solving a maze on paper (or a screen) also uses the brain’s visualization and problem-solving skills.

Mazes are a very old human invention, dating back to prehistoric times. Mazes and maze patterns were produced by ancient cultures in Egypt, Greece, Russia, India, North America and elsewhere. Labyrinth designs have appeared in caves, churches and public memorials, in mosaics, pottery and body art – and in numerous computer games. Maze analysis has also contributed to the branch of modern mathematics called topology.

Ancient mazes often had religious significance. These days, some people find walking through a labyrinth helps them to achieve a meditative or mystical state.

Do you have a great brain teaser? Please send it to us; we choose the best ones to feature on Mind Games.

We live in a world where facts and fiction get blurred
In times of uncertainty you need journalism you can trust. For 14 free days, you can have access to a world of in-depth analyses, investigative journalism, top opinions and a range of features. Journalism strengthens democracy. Invest in the future today. Thereafter you will be billed R75 per month. You can cancel anytime and if you cancel within 14 days you won't be billed.
Subscribe to News24
Next on Health24
Mind Games 6: Answers