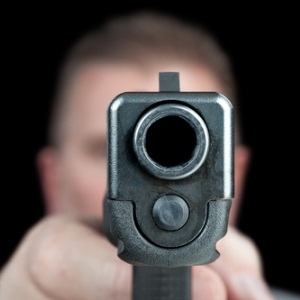 Man pointing gun from Shutterstock
Samantha Taylor painted Oscar Pistorius as gun-obsessed, violent and unpredictable in an interview with UK newspaper The Mirror.

Taylor described several occasions on which she feared for her life after Pistorius, who was found guilty of culpable homicide last week, flew into fits of rage. Such outbursts were often caused by the sprinter's intense jealousy.

She also claimed he had physically abused her.

When he was angry, Taylor said, he would bite and pinch her, sometimes so hard as to leave bruises or scars. "He gets so mad he can't even speak," she said.

It is not the first time that a darker side to Oscar's personality has been discussed. During his trial several incidents were discussed in which Oscar has been involved in physical altercations, as well as his anger after having lost a race at the Paralympic Games, declaring the winner was cheating.

Margie Orford, writing in the Guardian, believes that Oscar is stereotypical of Africa's macho culture, where women are routinely treated as second-class citizens compared to their husbands or boyfriends. This same culture glamorises violence and firearms. Pistorius' love for the latter has been well-detailed both inside and outside of the trial.

Called her a bitch

Taylor describes one night when she feared for her life so badly that she hid his gun to prevent him from using it on her. A drunk Pistorius slipped and chipped his tooth, believing Taylor had attacked him, he rounded on her, shouting, swearing and calling her a bitch.

Samantha Taylor was called as a witness by the prosecution during the trial. She says that she and the then-accused looked at each other the entire time. “I was just so frustrated because he was lying. He was so good at lying, " she said. Read: Why we lie

Also detailed was Oscar's many personalities. Taylor says her family would joke about which Oscar would turn up today. Sometimes he would exceptionally charming and romantic, other times he could be sullen, depressed and angry.

None of these descriptions paint a picture of Oscar Pistorius as an emotionally stable individual, but any pathological mental conditions were ruled out after the month of psychological assessment he underwent mid-trial.

See breaking news and the hottest health tips before anybody else by joining South Africa’s biggest and best health community, like health24 on Facebook now!
We live in a world where facts and fiction get blurred
In times of uncertainty you need journalism you can trust. For only R75 per month, you have access to a world of in-depth analyses, investigative journalism, top opinions and a range of features. Journalism strengthens democracy. Invest in the future today.
Subscribe to News24
Next on Health24
Is Oscar Pistorius really writing a book?