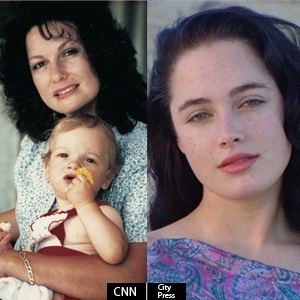 This has raised questions about the complexities of Oscar and Reeva’s relationship and brought renewed focus to the interesting topic of mother-son dynamics.

Reeva’s hair was actually a dark brown. She used highlights to colour her hair blonde. Both the bone structure and freckled complexion of the two women is notably similar.

Read: Has Oscar lost the plot?

Famous examples of this include Nigella Lawson whose former husband Charles Saatchi looked very similar to her father, Nigel Lawson.

Recent research which was conducted in Hungary and published in the journal Proceedings of the Royal Society B, lends support to what is known as the sexual imprinting hypothesis. This hypothesis claims that individuals create a sexual template based on their opposite-sex parent and, later in life, are attracted to individuals who fit this template.

This topic was also touched on by the famous psychoanalyst Dr Sigmund Freud who coined the term “Oedipus Complex”. The term refers to the way in which boys become sexually fixated on their mothers. The female version of this is the Electra Complex. While this fixation remains deep in the human subconscious – which explains why incest is not that common – it can, and does, influence one’s choice of mate.

Reeva Steenkamp on the left and Sheila Pistorius on the right Read: Why are we glued to the Oscar Trial?

The loss of Pistorius’ mother when he was 15 weighed heavily on the athlete who cites her as his role model and the driving force behind his success. Sheila Pistorius died at the age of 42 after being wrongly diagnosed with hepatitis. An adverse reaction to the medication she was given caused her death. Pistorius has the date of her death, as well as that of her birth, tattooed on his arm.

The similarity between Reeve and Sheila could explain why their relationship became serious so swiftly, despite Oscar stating at the time that he was not looking for a serious relationship.

Do you think the two women look alike? Sound off in the comments below.

We live in a world where facts and fiction get blurred
In times of uncertainty you need journalism you can trust. For only R75 per month, you have access to a world of in-depth analyses, investigative journalism, top opinions and a range of features. Journalism strengthens democracy. Invest in the future today.
Subscribe to News24
Related Links
Oedipus complex
Pistorius dabbled in dagga
Oscar trial: police make a mess
Next on Health24
Dog owners likely to report better emotional health during Covid-19 pandemic, study shows